As we know that the USA is the largest trading partner of India and China is in the second position. The basic difference between the India-USA and India-China trade is that India has a trade surplus of US& 16 billion with the USA while trade deficit of US& 53 billion with China in 2018-19.

China is the source of nearly 13.7% of India’s imports across sectors such as chemicals, automotive components, consumer electronics, and pharmaceuticals.

Sudarshan Jain, President of the Indian Pharmaceutical Alliance, said that “At least 70% of India’s drug intermediary needs are fulfilled by China,”

Due to the border disputes between these two countries, bilateral trade between India and China, already down by 15% since 2018. 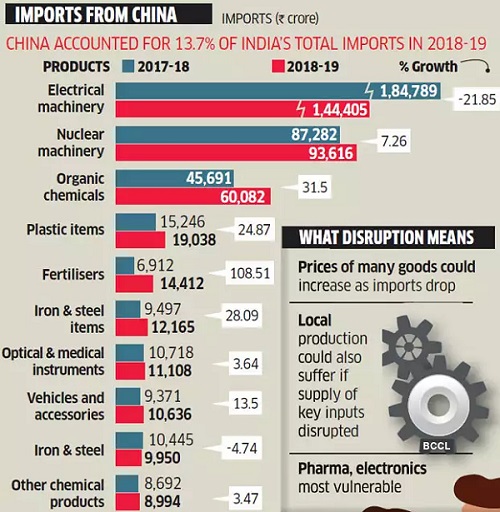 Most imported items from China are;

What India import from China?

Top Products which India Imports from China are;

Value of the Indian import from China:-

So the above data shows that China accounted for around 14% of India’s total imports in 2018-19. Electrical machinery is the biggest item imported from China since 2017.

What if the Chinese import disrupted?

1. If the import drops the price of many imported goods could shoot up which may cause higher inflation in the country.

2. If the supply of raw material is disrupted the local production of many goods may suffer a lot.

3. Pharma and electronics are the most vulnerable items which may experience huge falls in production due to dip in the supply of ingredients used in the manufacturing of these goods.

So it is clear that the Indian economy is heavily dependent on Chinese imports. Hence the government of India should take every step with utmost care.

13 Parameters to compare India and China