Optical Illusion: Can you find the right pair of eyes, nose and lips?

This optical illusion shows multiple eyes, lips, ears and noses painted on the face of a woman. Can you spot the right pair of eyes, nose and lips?

Vancouver-based makeup artist, Mimi Choi, created a bizarre optical illusion on her face that has stunned the netizens. While the artist is known for her creative illusion makeup skills with her face as a canvas, this one stands out.

The optical illusion shows multiple eyes, lips, ears and noses painted on her face. Can you spot the right pair of eyes, nose and lips? 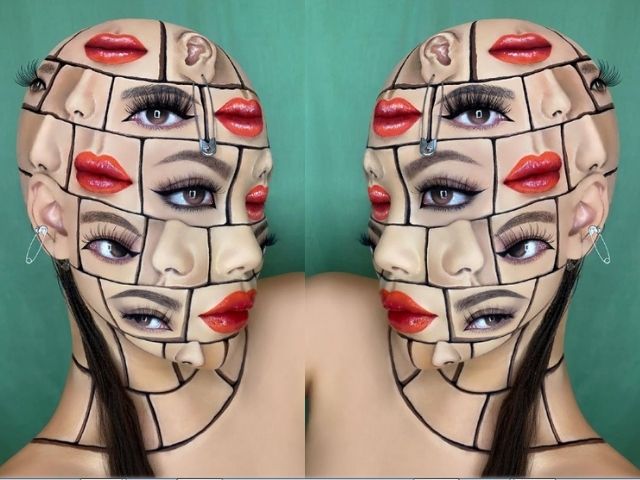 If not, don't worry. You are not alone and the image has left thousands of people stupefied.

"This is make-up. Trust your instinct. You’re not crazy. I slept 3 times with my bald cap and illusion on because I got really dizzy and nauseous from painting the side of my head lol. This took around 8 hours to create. I wanted to recreate my old multiple-feature illusions from 2015-2016 to see how much I’ve evolved,” Mimi Choi captioned her Instagram post.

In another Instagram post, she can be seen applying lipstick on what appears to be her lips. However, the users soon found out that those were not her lips but her closed eyelid. She captioned the post by asking users about their favourite makeup routine.

Most of Choi's masterpieces are inspired by the visions she sees while suffering from sleep paralysis. Choi uses her distinctive artistic skills to transform vision into art that helps her cope with her nightmares.

So, do you agree that art and illusions when mixed can fool even the best brains?