Optical Illusion: Can You Spot the Hidden Woman in 9 Seconds?

Do you want to test your situational awareness and observational skills with a simple test now?

Great, then let’s get started.

Take a look at this painting below. 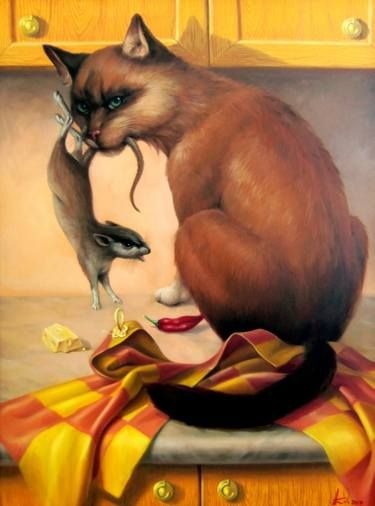 This beautiful painting is the creation of Armenian artist Artush Voskanyan who is known for creating paintings based on the theme of surrealism.

You can see a cat sitting on the top of the kitchen shelf where it captured a mouse which was trying to steal its favourite food i.e cheese.

In this image, you need to find the hidden woman in 9 seconds.

Surrealism is a movement that started in the 20th Century after World War I in the field of art and literature with the aim of developing techniques by which the unconscious mind can express itself.

Back to the optical illusion challenge.

Did you spot the hidden woman?

Hurry up, not much time left.

The hidden woman is not on the left side of the picture.

Now, you can refine your search and find the hidden woman.

The lovers of optical illusion puzzles with their superior observation skills might have already spotted the hidden woman.

While the first-timers might be having a hard time finding a woman.

Want to know where the hidden woman is?

Scroll below for the solution and explanation.

The woman in reality is not there, but due to the arrangement of the objects in the image in such a calculated manner, it gives the appearance of a woman’s face. If you look carefully, the space between the body of the mouse and cat gives the appearance of the forehead, and the face of the mouse acts as the eyes of the woman, the cat’s paws her nose and the red jalapeno chilly look like her lips.

Optical Illusion: You Have Hawk Eyes if You Can Spot the Hidden Dog in 3 Seconds

Can You Spot a Mug of Hot Chocolate in This Optical Illusion in 7 Seconds?