Pro-Freedom Rally in Pakistan's Sindh: What is Sindhudesh and why placards of PM Modi and other world leaders were raised?

Sindudesh is a demand for a separate homeland for Sindhis' proposed by Sindhi nationalist parties for the creation of a Sindhi state. 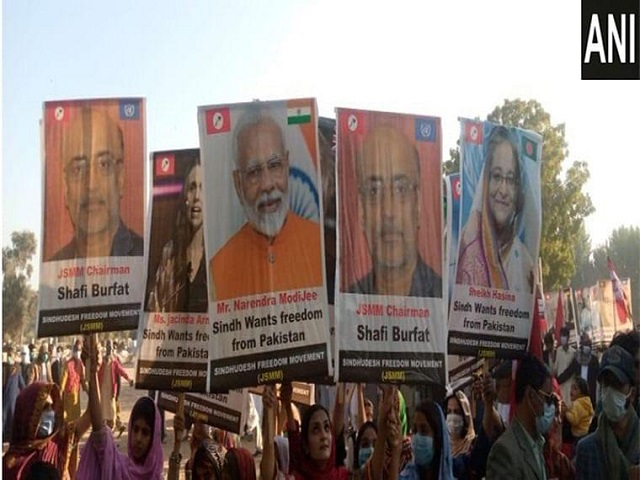 On the 117th birth anniversary of G.M. Syed (17 January 2021), placards of Indian Prime Minister Narendra Modi and other world leaders were raised by the protestors' at a pro-freedom rally in Pakistan's Sindh to seek their intervention for the freedom of Sindudesh. Pre-freedom slogans were raised during the rally held in G.M. Syed's hometown Sann in Jamshoro district of Pakistan's Sindh province.

Speaking on the occasion, Chairman of Jeay Sindh Muttahida Mahaz, Shafi Muhammad Burfat stated, "Among all these barbaric assaults on its history and culture, and all these ages of occupation and dawns of independence Sindh have retained and maintained its separate historical and cultural identity as a pluralist, co-existent, tolerant and harmonious society where all the different cultures, languages and ideas of the foreign and native people have not only influenced each other but accepted and absorbed the common message of the human civilisation."

He added, "This historical synthesis of religions, philosophies and civilisation from the east and west has given our motherland Sindh a distinct place in the history of humanity. While the Sindh gave India its name, the Sindh citizens who pioneered in the fields of industry, philosophy, marine navigation, mathematics and astronomy are today chained by the Islam-o-fascist terrorist unconstitutional forced federation of Pakistan by the military might of Punjabi imperialism in the name of Islam."

He further stated, "Our nation believes in universal peace, unity of humanity and human development and our country has remained as an independent nation on the face of the earth for thousands of years. But today, it is enslaved by Punjabi colonialism in the name of religion and through the might of the military. The Sindhi people do not want to remain in the oppressive slavery of the terrorist state of Pakistan, and therefore, we appeal to the entire international community to step forward and support us in our struggle for national independence from the fascist theocratic Islamist terrorist state of Pakistan."

It is a demand for a separate homeland for Sindhis' proposed by Sindhi nationalist parties for the creation of a Sindhi state. Sindhudesh will either be autonomous within Pakistan or independent from it. As per the epic Mahabharata, Sindhudesh was the ancient name for Modern Sindh.

The demand for a separate homeland emerged in the year 1967 under the leadership of G.M. Syed and Pir Ali Mohammed Rashdi, after the freedom of Bangladesh.

In the year 1972, G.M. Syed proposed the formation of Sindhudesh-- independent nation for the Sindhis. The movement for the Sindhi Language and identity was inspired by the Bengali language movement.

Sindhi separatists reject the parliamentary idea of struggle for attaining their freedom and rights as no Sindhi nationalist party has ever voted into power at any level of government in Sindh.

Sindhu Desh Liberation Army (SDLA): It is an inactive Sindh based militant group. The group took the responsibility of a series of minor blasts carried out between November 2010 and February 2011.

Jeay Sindh Students' Federation: It is the student wing of various separatist organizations struggling for the freedom of Sindhudesh. It was founded in 1969.

Sindh National Movement Party: It was formed in December 2011 for a politically, culturally, economically and geographically independent Sindh.

Some nationalist parties and associations have been banned by the Pakistani Government over 'terrorist, anti-state and sabotage' activities including Jeay Sindh Qaumi Mahaz- Aresar group, Sindhudesh Liberation Army, and Sindhudesh Revolutionary Army.

Pakistan Democratic Movement (PDM): All you need to know

74th Independence Day: Why Pakistan gained its independence a day before India and what are the main reasons behind it?