World Homoeopathy Day is celebrated on 10 April to mark the birth anniversary of the founder of Homoeopathy, Dr. Samuel Hahnemann. Let us have a look in detail about the World Homeopathy Day, 2020 theme, its history and some key facts about homoeopathy. 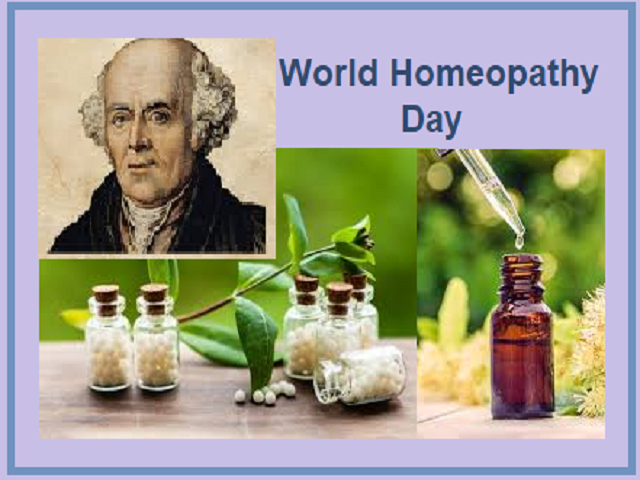 Homoeopathy medicines are safe to use because they rarely cause side-effects. It is based on the principle of 'like cures like'. It means that a substance in a small amount is taken will cure the same symptoms it causes if taken in large amounts. Homoeopathy is derived from the Greek words homeo, means similar, and pathos, means suffering or disease.

Homeopathy does not use drugs and surgery. It is based on the belief that everyone is an individual, has different symptoms and should be treated accordingly. Homoeopathy first time gained prominence in the 19th century after extensive pioneering work by the German physician and chemist Samuel Hahnemann (1755-1843). But its origin date back from the 5th century BC, when the 'father of medicine' Hippocrates introduced homoeopathy remedies to his medicine chest.

It is said that it was Hippocrates who understand the disease, how it affects our bodies, rather than his remedies, that made his discoveries homoeopathic. He told that it is necessary to understand the symptoms of each individual, how they reacted to diseases and their power of healing are important in diagnosing and treating the illness. This understanding of the individual became the basis of homoeopathy today. Let us tell you that after Hippocrates, homoeopathy was largely neglected until Hahnemann reinvented it in the late 18th century. That time disease was rampant, medical treatments became increasingly violent and invasive. Hahnemann founded clinical medicine totally unacceptable. He worked hard on medicines and chemistry and protested against the poor hygiene that was the main reason that was accelerating the spread of disease. He was against the brutal medical practices and use of strong medications that cause terrible side-effects. But his disillusionment finally led him to give up medicine to work as a translator. He was translating "A Treatise on Materia Medica" by Scottish physician Dr. William Cullen, Hahnemann discovered something in the medical field that made him the true founder of Homoeopathy.

Due to the astringent properties of the quinine, Cullen told that it was an effective treatment for malaria. Hahnemann also knew about it as it helps to fight malaria, but he was in doubt about the astringent properties. He did research and made several investigations. He dosed himself with quinine for some days and noted his reactions. He was surprised that one by one, he developed the symptoms of malaria but he was not suffering from it. Each time he takes the dose of quinine and symptoms recurred. On the other side he noticed that when he did not take the medicine, the symptoms went away. Then he believed that it was the ability of quinine to cause symptoms of malaria that made it such an effective treatment. To illustrate his theory he conducted some tests known as "provings" on several volunteers and noted each people reactions. He repeated the same tests with others and with popular medicines like arsenic, etc. He noted the same as Hippocrates discovered that symptoms and healing responses depend on the individual.

From the symptoms and testing, he built a drug picture for each substance he tested. The next stage of Hahnemann's is to built a "symptoms picture" of each patient before prescribing the treatment. He further discovered that more and more symptoms from the patient likes and dislikes, what made them better or worse, the more accurately he will be able to prescribe a suitable remedy. This drug picture of Hahnemann's is used today in prescribing the best homoeopathy treatment.

World Homoeopathy Day (WHD) is celebrated on 10 April and the day has become the red-letter day for the Homoeopathy profession because it is being celebrated under the aegis of Ministry of AYUSH, Govt. of India for last few years in New Delhi.

This year Ministry of AYUSH let NIH organise World Homoeopathy Day at Kolkata, the cradle of Homoeopathy in India. NIH with the help of Central Council for Research in Homoeopathy is organising an International Conference on 10th and 11th April 2020 at Biswa Bangla Convention Centre, New Town, Kolkata. But due to COVID-19 pandemic, the conference is postponed.

Homoeopathy Awareness Week is observed from 10 April to 16 April and celebrates the birth of Samuel Hahnemann, the founder of Homoeopathy. Several varieties of public events are organised including free lectures, volunteer first-aid at events, free homoeopathy clinics, media interviews, educational posts on Twitter and Facebook, etc.  and are also shared in various countries.

Why is World Homoeopathy Day celebrated?

It is celebrated to raise awareness about the homoeopathy and to improve the accessibility to homoeopathy. It is also important to understand future strategies required to develop homoeopathy on a larger scale and its challenges. It is required to focus on the quality of education, enhancing the success rate of an average practitioner.

Therefore, Homeopathy is a medical system that believes that the body can cure itself. Practitioners of homoeopathy use tiny amounts of natural substances, like plants and minerals. They believe that these stimulate the healing process. World Homoeopathy Day is celebrated on 10 April to raise awareness about homoeopathy. Also, the day commemorates the birthday of Samuel Hahnemann, the founder of Homoeopathy.

World Oral Health Day 2020: All you need to know