World Hypertension Day (WHD) 2022: This year's theme generates awareness about the importance of the accurate measurement of blood pressure. The main objective behind celebrating the day is to educate people and spread awareness about hypertension and its effects on the body. Some of the major causes of hypertension in young people are high-stress levels, obesity, poor dietary habits, and a sedentary lifestyle. It is also said that prolonged hypertension puts a person at a higher risk of various medical conditions, including chronic kidney disease, stroke, heart failure, etc.

Never neglect high BP or just a headache, hypertension may lead to a serious health crisis. It is necessary to raise awareness about hypertension disease, its causes, and prevention

World Hypertension Day is celebrated by World Hypertension League (WHL) annually on 17 May to spread awareness about hypertension disease, its prevention, detection, and control. The main risk factor to develop the cardiovascular disease is high blood pressure.

WHD was first inaugurated in May 2005. Basically, it is a high blood pressure condition and causes various health problems like heart disease and stroke. In high blood pressure, the force on the arteries is higher and usually, it has no signs or symptoms. This day encourages citizens of all countries to prevent and control it. Hypertension is also known as a silent killer, the modern epidemic.

The theme of World Hypertension Day 2022 is "Measure Your Blood Pressure Accurately, Control It, Live Longer." The theme focuses on combatting low awareness rates across the globe, mainly in low to middle-income areas, and accurate blood pressure measurement methods. The main aim is to increase awareness about high blood pressure (BP) in all populations worldwide and also to focus on accurate BP measurement.

The theme of World Hypertension Day 2020 was"Measure Your Blood Pressure, Control It, Live Longer." The theme focuses on increasing high blood pressure (BP) awareness in all populations around the world.

The theme of World Hypertension Day 2019 was "Know your numbers". Let us tell you that in 2019, WHL in conjunction with the International Society of Hypertension (ISH) promoted May Measurement Month (MMM).

Nowadays in so much busy life, people are not getting time for themselves and are suffering from Stress and Tension which further leads to hypertension problems. Hypertension is a type of situation known as high blood pressure.

A person suffering from hypertension disease damages their health and is not able to concentrate on their work properly. People become unconfident in several types of activities.

So, we can say that hypertension is another name for high blood pressure which can cause severe complications and also increases the risk of heart disease, stroke, and death.

Do you know that blood pressure is the force that is exerted by the blood against the walls of the blood vessels? According to the World Health Organisation (WHO), the growth of the processed food industry has impacted the amount of salt in diets worldwide and this plays a major role in hypertension.

READ| What is the Bombay Blood Group? 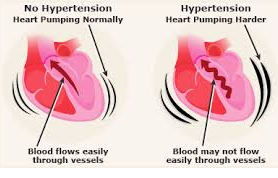 Source: www.kidshealth.org.com
- Normal blood pressure is 120 over 80 mm of mercury but hypertension is higher than 130 over 80 mmHg according to the guidelines issued by the American Heart Association (AHA).

- Acute causes of high blood pressure include stress but it can happen on its own or it can result from an underlying condition like kidney disease etc.

- If hypertension is not managed can lead to heart attack, stroke, and other health problems.

Blood pressure can be regulated through diet, and lifestyle before it reaches hypertension. Regular physical exercise should be done. According to the guidelines recommended by the doctors, people suffering from hypertension disease should do at least 150 minutes of moderate aerobic exercise or 75 minutes of vigorous-intensity exercise. People should exercise at least 5 days a week like they can do walk, jogging, cycling or swimming. The medication also helps in reducing high blood pressure, developing strategies to manage unavoidable stress, etc.

According to the guidelines issued by the American Heart Association (AHA) in 2017:

READ| Do you know which Human Body Organs can be donated? 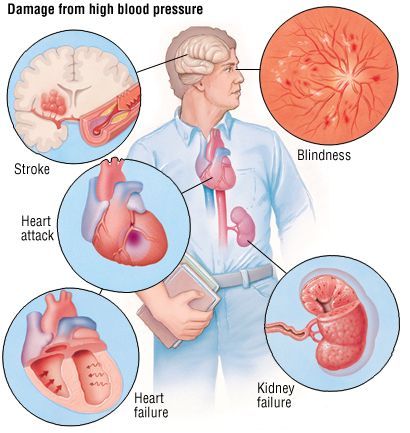 Source: www. www.health.harvard.edu.com
As we know that this disease is known as a silent killer and maybe a person not notice any symptoms. But it can cause damage to the cardiovascular system and internal organs like the kidneys.

Also, high blood pressure causes sweating, anxiety, sleeping problems, and blushing. And in a hypertensive crisis, a person may experience headaches and nosebleeds.

Long-term hypertension can cause atherosclerosis where the formation of plaque results in the narrowing of blood vessels. This can lead to heart failure, heart attacks, an aneurysm that is an abnormal bulge in the wall of an artery that can burst and may cause severe bleeding, kidney failure, stroke, etc.

READ| How is blood circulated in the human body?

Primary Hypertension: High blood pressure that is caused by another condition or disease is called primary or essential hypertension. It can result from multiple factors, including blood plasma volume and the activity of hormones that regulate blood volume and pressure. It is also influenced by environmental factors like stress and lack of exercise.

Secondary Hypertension: If high blood pressure is caused due to another condition. It has some specific cause and is a complication of another problem. It can result from kidney disease, diabetes, pheochromocytoma which is a rare cancer of the adrenal gland, Cushing syndrome, hyperthyroidism, pregnancy, obesity, etc.

May Measurement Month (MMM)
It is a global awareness campaign initiated by the International Society of Hypertension (ISH), which has the world's leading scientists, clinicians, health care providers, and allied health care workers, all with a common interest in hypertension research.

MMM was launched in 2017 to provide knowledge to people about blood pressure and how to reduce hypertension's adverse effects on health.

Do you know that blood pressure is the number 1 contributing risk factor for global death-causing strokes, heart attacks, and other cardiovascular complications?

According to the results published on the eve of World Hypertension Day 2018 in a paper in The Lancet Global Health, over 150,000 people were found with previously unidentified hypertension and over 100,000 with adequately treated hypertension. Last May, the team, and volunteers of MMM reached around 1.5 million people.

READ| Important Days and Dates in May 2022