The Leaders for Tomorrow Foundation, Press Club of India and the Voice of Kids has released the results of the National Level Essay Competition conducted for the High School Students. Check result and prize details here. 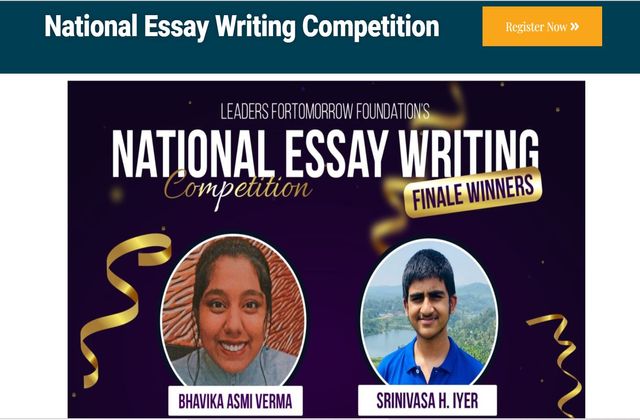 The Leaders for Tomorrow Foundation, Press Club of India and the Voice of Kids has released the results of the National Level Essay Competition conducted for the High School Students. The Essay Competition was conducted in partnership with Korean Culture Centre, Goethe-Institut and Development Channel.

As per reports, students from 27 states and Union Territories participated in the Essay Writing Competition which was based on the Sustainable Development Goals of the United Nations.Binoy Job - Founder and CEO, Leaders for Tomorrow Foundation stated that the group was overjoyed with the overwhelming response and participation of the students from across the country for the competition. He also added that they look forward to organizing the competition at a much larger scale in the upcoming years.

The top 3 winners will be awarded Rs. 20,000, Rs. 15,000 and Rs. 10,000 respectively along with other additional prizes which include three-full scholarships for German Language courses offered by Goethe-Institut, Full Scholarships for writing and Reporting programmes offered by Development Channel, Certificates, Cash awards, Trophies and medals. The top 100 winners of the competition competed in the finale of the competition which was conducted in association with the Principal Partner- Korean Culture Centre where students were given the option to write an essay on Cultural Relations between Korea and India or Korea’s Status and Role in International Society.

The statement issued further adds that the top 100 participants will also be provided with the opportunity to be trained as student reporters, working on reporting about development issues, sponsored by the Development Channel. The training will commence from December 27, 2021. The winning essays at the State and National Levels will also be published in Voice of Kids.