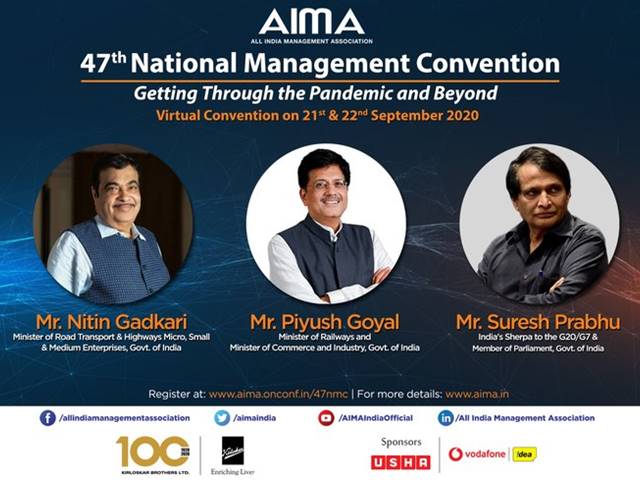 The keynote to AIMA’s 47th National Management Convention was delivered by Infosys Founder Mr. Narayana Murthy. The KeyNote Session was focused on the theme of Corporate Governance via 'Setting the Board Agenda: Winning Trust and Influencing Ethics' topic.

Mr. Murthy in his opening remarks expressed his concerns about board governance in India and offered solutions for the same. The main source of corporate scams, according to Mr. Narayana Murthy, is the moral weakness and incompetence of the chairman of the board in the companies where scams happen. “When the CEO becomes more powerful than the board and the chairman operates at the pleasure of the CEO, then such things happen,” he says.

On Protection of Whistleblowers

Another aspect that Mr Murthy touched upon was Whistle Blowers. In his address, he said that though the whistleblowers have been given legal protection, they still face harassment and social stigma. He wants safeguards against bosses’ vendetta against whistleblowers. However, he says, “No whistle-blower has the right to harm an organization on which a large number of families depend for their livelihood.” On investigation of complaints filed by whistleblowers, Mr Murthy rejects the idea of internal investigation; instead, he advocates appointing a committee of outsiders by the top shareholders or the SEBI to investigate whistleblower complaints. If the company is found guilty, he recommends, the SEBI must blacklist all members of the board and management.

Future of Indian IT Firms

Mr. Murty also talked about the current state of the Indian IT Services Industry and how does he see its future in the post-pandemic world. Mr. Murthy noted that India IT services companies will continue to grow at 7%-10% and their operating margin will continue to be 15%-20%. However, he argued that Indian IT companies will have to become more like consulting firms to increase their per capita revenue. “Indian IT industry has to move from reactive problem solving to proactive problem recognition and solution development,” he said.

Another important challenge that was discussed at AIMA’s 47th NMC was the future of IT Services Industry in a post-pandemic world. The session was addressed by Mr. Rishad Premji – Chairman Wipro Limited, who shared his insights on the topic of 'Global Business in a Fractured World: Reorganizing IT Services Supply Chain'.

Growth in Demand for Digital Services

During his initial remarks, Mr Premji noted that India's IT industry has enhanced its reputation for meeting its customers’ needs during the COVID crisis, but it has not been immune to their problems. He also added that the Indian IT services industry struggled in the April-June quarter because customers cut spending on technology early on in the COVID crisis, but since then the industry had stabilized as customers have come back looking for help in shifting to the digital model. “There is a change in the customers’ mind-set and they are becoming more comfortable with the digital medium,” he said. Mr Premji credited the government for relaxing work regulations and permitting work from home. He hoped that the change would be made permanent beyond the current expiry of 31 December 2020.

In the second leg of the session, Mr Premji talked about the risk posed by changing technologies to the IT Services Industry of India. Addressing AIMA’s 47th National Management Convention, he said that despite the growth in cloud and software services globally, there are several large organizations that are still operating on legacy systems. Such organizations would need help in transitioning to the new technologies. Moreover, the Indian IT industry would leverage new technologies, such as AI, to deliver work to its customers.

On the sustainability of the trends of work from home and business by video, Mr. Premji said that it would be wrong to discount the power of person to person dealings. “While videoconferencing does 80% of the job, it does not allow the building of relationships and trust. Digital interaction is transactional,” he said. Mr. Premji said that the work from home trend will not lead to foreign customers transferring work from local remote workers to Indian remote workers. Customers still want people near them, he said. “Now, it will be a hybrid model,” Mr. Premji said, adding that reskilling people would now be a major task for Indian IT companies.

AIMA’s 47th National Management Convention also saw Global Experts in the field of Geopolitics discuss the emergence of a new world order in the post-pandemic world. The discussion was primarily focused on India-China Relations and the recent developments on LAC.

Emotions are high in India and China after the Galwan Valley incident but foreign policy cannot be dictated by emotions, says Former Managing Director of World Economic Forum, Mr. Claude Smadja. “The agreement between the foreign ministers of the two countries is a good start and both governments should build on that,” he says.

The breakdown of the US and China relations is permanent and India is a natural partner for the west, but India must not close the door on China, according to Mr. Martin Wolf, Associate Editor and Chief Economics Commentator, Financial Times, London.

Ms. Nirupama Rao, Former Foreign Secretary and Ambassador of India to China USA & Sri Lanka believes that India’s relationship with China needs to be reconceptualised following the erosion of trust between the two countries.