Financial constraints limit women to pursue MBA Programme as per a report released by GMAC survey. Find out the other factors that inhibit the managerial growth of women in the corporate sector.

As per a report by GMAC, the MBA programme is also witnessing a skewed sex ratio with more men/male pursuing the course in comparison to the women/female counterpart. The preference for pursuing the managerial degree has always remained on the forefront of the aspirants but has unfortunately been attracting more men than women.

A white paper from US-based Graduate Management Admission Council (GMAC), conducted by GMAT revealed that one in every three women around the world does not choose MBA due to financial constraints. The survey was conducted on 5,900 female and male counterparts from 15 countries.

The bleak observation came to limelight on the on International Women's Day. On this finding Sangeet Chowfla, President and CEO of GMAC commented that "Women have made phenomenal progress in attaining business master's degrees, yet they have not caught up with men in the share of MBAs earned". She even added that "Our extensive global segmentation research and market intelligence looked at several important underlying factors that contribute to this growing participation of women in business master's and lack of parity in MBAs, with financial concerns being the number one issue cited by female applicants."

Hence, it can be inferred that seeking scholarships and financial aid are the top priorities of women who are willing to pursue a managerial career. In addition, when surveyed, men (33%) have cited that they were waiting for an offer from additional schools as their reason for delaying acceptance.

But a stark gender difference was evident on this issue in the US. More than a third (38%) of women survey respondents cited financial reasons as their number one reason for not yet accepting their admissions offer compared to 20% of male respondents. But as per this study, obtaining funds to pay for schools is a bigger challenge for men than for women in both India (8% women vs. 14% men) and China (9% vs. 11%).

Take a look at the previous year data. It will elucidate the gender distinction faced by women in pursuing the MBA Degree worldwide. 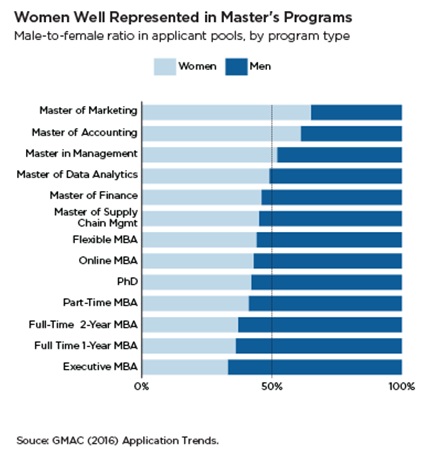 If we take a look at the share of the applicant pool then women represent a greater share of than men in many of the business master's programmes, such as marketing, accounting, and management.

Such hindrances pose lack of gender parity in MBA programmes and de-motivate the potential and talented pool of society to hold back from pursuing a brighter career opportunity.