All students of Akansha Super 30 which was started in 2015 by RailTel, have successfully cracked the JEE Main 2019. Check complete details here

All 30 students of RailTel's Akansha Super 30 Centre, Dehradun, have successfully cleared JEE Main 2019. Akansha Super 30 was started in 2015 by RailTel. In this centre, free residential coaching is provided to the economically weak but brilliant students for IIT JEE exams. Every year, Akansha Super 30 conducts a written test in which questions from physics, chemistry, mathematics and aptitude test are asked. 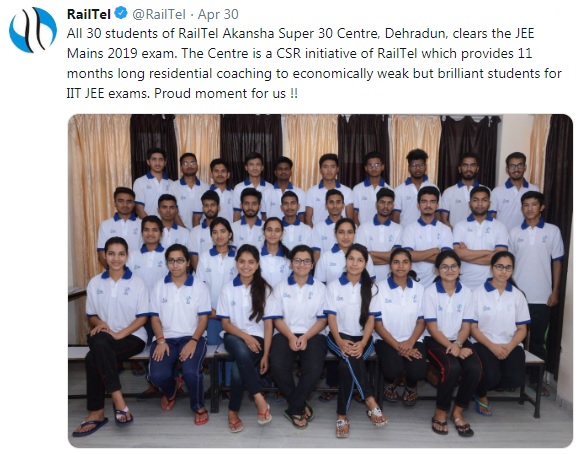 Puneet Chawla, CMD/RailTel said, “It is a big achievement for the students who have shown tremendous potential by qualifying the exam despite all odds. We are happy to provide guidance to these kids who can now fulfill their dreams of becoming an engineer.”

RailTel Corporation is a 'Mini Ratna (category -I)' public sector undertaking (PSU) of the Railways Ministry and Centre for Social Responsibility & Leadership (CSRL). It is one of the largest neutral telecom service providers in the country, with a pan -India optic fiber network reaching around 70 per cent of India's population.

JEE Main Result 2019: Not Qualified for JEE Advanced? Try these options before taking a year drop