In this article you will get CBSE Class 10 Science chapter 6, Life Processes: NCERT Exemplar Problems and Solutions (Part-III). Every question has been provided with a detailed explanation. All the questions given in this article are very important to prepare for CBSE Class 10 Board Exam 2017-2018. 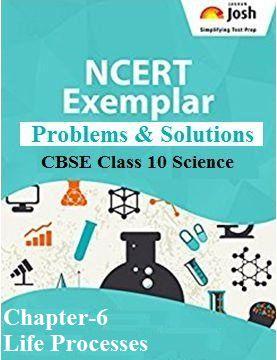 Here you get the CBSE Class 10 Science chapter 6, Life Processes: NCERT Exemplar Problems and Solutions (Part-III). This part of the chapter includes solutions for Question No.73 to 82 from the NCERT Exemplar Problems for Class 10 Science Chapter: Life Processes. These questions include only the Long Answer Type Questions framed from various important topics of the chapter.

Find below the NCERT Exemplar problems and their solutions for Class 10 Science Chapter, Life Processes:

Question. 73 Explain the process of nutrition in Amoeba.

Amoeba follows the holozoic type nutrition. Holozoic refers to engulfment of whole/part of plant/animal in liquid/solid state. The heterotrophic Amoeba engulf the particulate food. The process of obtaining food by Amoeba is called phagocytosis. It is carried out as per the following steps:

(i) Ingestion: Engulfment of food particle by forming temporary projections called pseudopodia is called as ingestion. The engulfed food is taken inside the body by  pinching off the food vacuole of pseudopodia.

(ii) Digestion: Breakdown of complex substances into simpler ones by digestive enzymes takes place in food vacuole only.

(v) Egestion: The waste products of Amoeba are disposed off in surrounding water by the process of simple diffusion through its cell membrane/ body surface.

Mouth cavity: It is the oral cavity inside mouth, containing teeth, tongue and three pairs of salivary glands.

Pharynx: The oral cavity opens into the pharynx. It is the part where food passage and air passage cross each other.

Oesophagus: It is a long muscular, tube that passes through thoracic cavity and diaphragm into abdominal cavity and carries the food down to the stomach by peristalsis.

Stomach: The stomach is a thick-walled, J-shaped organ present on the left side of the abdominal cavity and is continuous with the esophagus above and the duodenum of the small intestine below.

Small intestine: The pyrolic valve of Stomach leads to a tubular structure called as small intestine. It has three divisions, i.e., duodenum, jejunum and ileum.

Large intestine: The ileoceacal valve of small intestine leads to large intestine, which can be divided into two parts as anterior colon and posterior rectum.

The rectum opens at the anus, which in turn serves as site of defecation, the expulsion of feces. 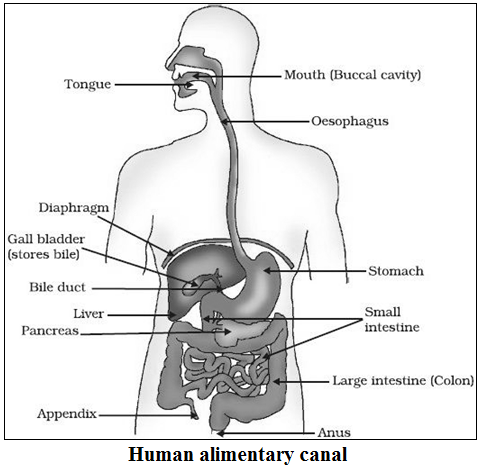 Question. 75 Explain the process of breathing in man.

Breathing in humans involves inspiration and expiration that are explained below:

(i) Inspiration: Inspiration, the active phase of ventilation, includes contraction of diaphragm and the external intercostals muscles and movement of rib cage upward and outward. Deep inspiration involves contraction and lowering down of diaphragm to facilitate expansion of lungs by increasing volume of thoracic cavity. The expansion of thoracic cavity and expansion of lungs create the air pressure difference outside the lung and alveoli to facilitate flow of air into alveoli.

(ii) Expiration: It is passive phase of breathing that involves relaxed stage of diaphragm (now dome-shaped) and intercostals muscles causing downward and inward movement of rib cage. This causes decreased volume of thoracic cavity and recoiling of lungs. The resultant increased air pressure in alveoli as compared to atmospheric pressure causes air to move outside the body.

Question. 76 Explain the importance of soil for plant growth.

Soil is important for plant growth due to the reasons given below:

(i) Anchorage: Soil holds the plants and provides the base on which-all the terrestrial and some aquatic plants grow.

(iii) The roots of a plant also take the oxygen required for respiration from the soil particles by the process of diffusion.

Question. 77 Draw the diagram of alimentary canal of man and label the following parts.

The diagram of alimentary canal of man and its parts are shown below: 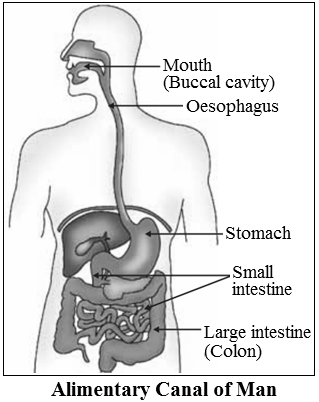 Question. 78 How do carbohydrates, proteins and fats get digested in human beings?

(i) Oral cavity: Salivary amylase present in saliva breaks down starch into maltose.

(a) Pancreatic amylase presents in pancreatic juice breakdown the remaining starch into maltose.

(b) Maltase of intestinal juice breakdown maltose into glucose units.

(i) Mouth does not have any digesting enzyme for proteins and hence proteins digestion does not start in oral cavity.

(ii) Stomach Pepsin is a protein digesting enzyme secreted by chief cells of stomach wall in its inactive form called as pepsinogen which in turn is converted into active pepsin upon exposure to HCl. Pepsin starts protein digestion into small peptides.

(b) Peptidases of intestinal juice digest the peptides into amino acids.

(a) Emulsification of large globules of fats into smaller droplets by bile salt.

(b) Pancreatic lipase digests the emulsified fat globules into glycerol and fatty acids.

(c) Glycerol and fatty acids enter the villi cells where they are rejoined and packaged as lipoprotein droplets before entering the lacteals.

Question. 79 Explain the mechanism of photosynthesis.

Photosynthesis is the process involving production of carbohydrates by using carbon dioxide as a chief carbon source and water as electron donor. It can be represented as.

(a) Light reaction: Since these reactions cannot take place in absence of light, they are called as light dependent reactions or light reactions. It includes:

(b) Dark reaction: Since these reactions do not require Sunlight and can occur in presence or absence of Sunlight, they are termed as dark reaction or light independent reactions.

Question. 80 Explain the three pathways of breakdown in living organisms.

Cellular respiration is the process of breakdown of food substances into simpler ones to release the stored energy. On the basis of presence or absence of oxygen, it can occur through aerobic or anaerobic pathway.

(i) Aerobic respiration: Glucose in the presence of oxygen (air), breaks down to carbon dioxide and water with release of large amount of energy. It occurs in three steps, glycolysis , citric acid cycle and ETC.

Glycolysis is breakdown of glucose into pyruvate. It is oxygen independent pathway occurs in cytoplasm. Pyruvate is decarboxylated into acetyl coA in cytoplasm only.

Citric acid cycle is the second phase of cellular respiration in which acetyl Co are enzymatically oxidized into carbon dioxide and the released energy is stored in NADH and FADH2.

Electron transport chain includes downhill flow of electrons to final electron acceptor (Oxygen, which is then reduced into water) through a chain of membrane-bound carriers to facilitate the uphill transport of protons across a proton-impermeable membrane and ATP synthesis.

Alcohol fermentation Due to limited oxygen availability, pyruvate remains in cytoplasm where pyruvate decarboxylase and alcohol dehydrogenase enzymes carry out the second phase of anaerobic respiration and produce ethanol and carbon dioxide with limited amount of energy being released.

Lactic acid fermentation Due to limited oxygen availability, pyruvate remains in cytoplasm where it is broken down into lactic acid with limited amount of energy being released.

Question. 81 Describe the flow of blood through the heart of human beings. 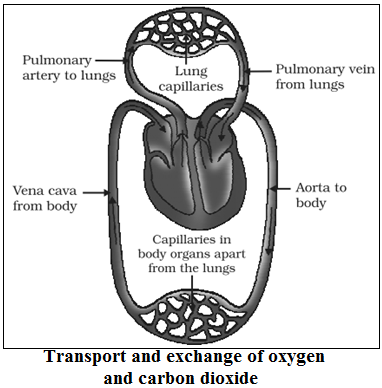 Question. 82 Describe the process of urine formation in kidneys.

Urine formation occurs in the kidneys involves the following steps:

(i) Glomerular Filtration: Glomerular filtration is passive filtration of the blood that starts with entry of blood through glomerulus, a special ball of capillaries. The overall process leads to removal of 15-25% water and solutes from the plasma entering the glomerulus. Filtration of any substance through glomerular filtration depends on molecular size, protein binding, ionization, polarity, and working conditions of kidney in general.

(ii) Tubular reabsorption:  Glomerular filtrate enters the proximal convoluted tubule wherein nutrient and salt molecules are actively reabsorbed and pushed into the peritubular capillary network while water flows passively. The filtrate is now composed of urea, some salts and water.

The urine formed is collected in the urinary bladder.