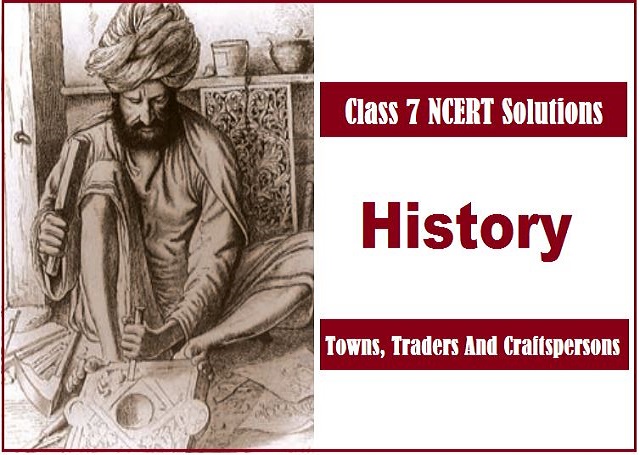 NCERT Solutions for Class 7 Social Science History Chapter 6 - Towns, Traders and Craftspersons are provided here to help you learn all the concepts easily and effectively. We have provided here the best and the simplest answers to all the questions given in chapter 6 of the latest NCERT Book for Class 7 History. You can easily download all the questions and answers in PDF format form the link provided below in this article.

Check below the NCERT Solutions for Class 7 History Chapter 6 - Towns, Traders and Craftspersons:

(d) The Dutch established a settlement at ———— in Andhra Pradesh.

(b) Ajmer is associated with the Sufi saint Khwaja Muinuddin Chishti.

(c) Hampi was the capital of the Vijayanagara Empire.

(d) The Dutch established a settlement at Masulipatnam in Andhra Pradesh.

(a) We know the name of the architect of the Rajarajeshvara temple from an inscription.

(b) Merchants preferred to travel individually rather than in caravans.

(c) Kabul was a major centre for trade in elephants.

(d) Surat was an important trading port on the Bay of Bengal.

(b) False; Since the merchants had to pass through many kingdoms and forests, they usually travelled in caravans and formed guilds to protect their interests.

(c) False; Kabul was a major centre for trade in horses.

(d) False; Surat Port is situated on the Western Coast of India..

3. How was water supplied to the city of Thanjavur?

Water supply to the city of Thanjavur came from wells and tanks.

4. Who lived in the “Black Towns” in cities such as Madras?

Merchants, artisans (such as weavers), native traders and craftspersons lived in the ‘Black Towns’.

5. Why do you think towns grew around temples?

Towns grew around temples because of the following factors:

6. How important were craftspersons for the building and maintenance of temples?

Craftspersons were very important for the building and maintenance of temples because:

(i) The Vishwakarma community consisting of goldsmith, bronzesmiths, blacksmiths, masons and carpenters played an essential role in the building of temples.

(ii) Weavers such as the Saliyar or Kaikkolars were the prosperous communities who made ample donations to temples.

(iii) The craftspersons of Bidar were skilled in copper and silver works who played an essential role in adorning of temples with art and craft.

7. Why did people from distant lands visit Surat?

People from distant lands visited Surat due to the following reasons:

(i) Craftspersons were not free to sell their own crafts and textiles as they were controlled by the European companies.

(ii) They worked on a system of advances which meant that they had to weave cloth which was already promised to European agents.

(i) Here the craftspersons were independent and were free to sell their own products.

(ii) They developed the crafts on interest and they were creative and specialized.

(iii) Their production focused on the needs of the temple and the pilgrims.

Download all the NCERT Solutions for Class 7 History Chapter 6 from the following link: