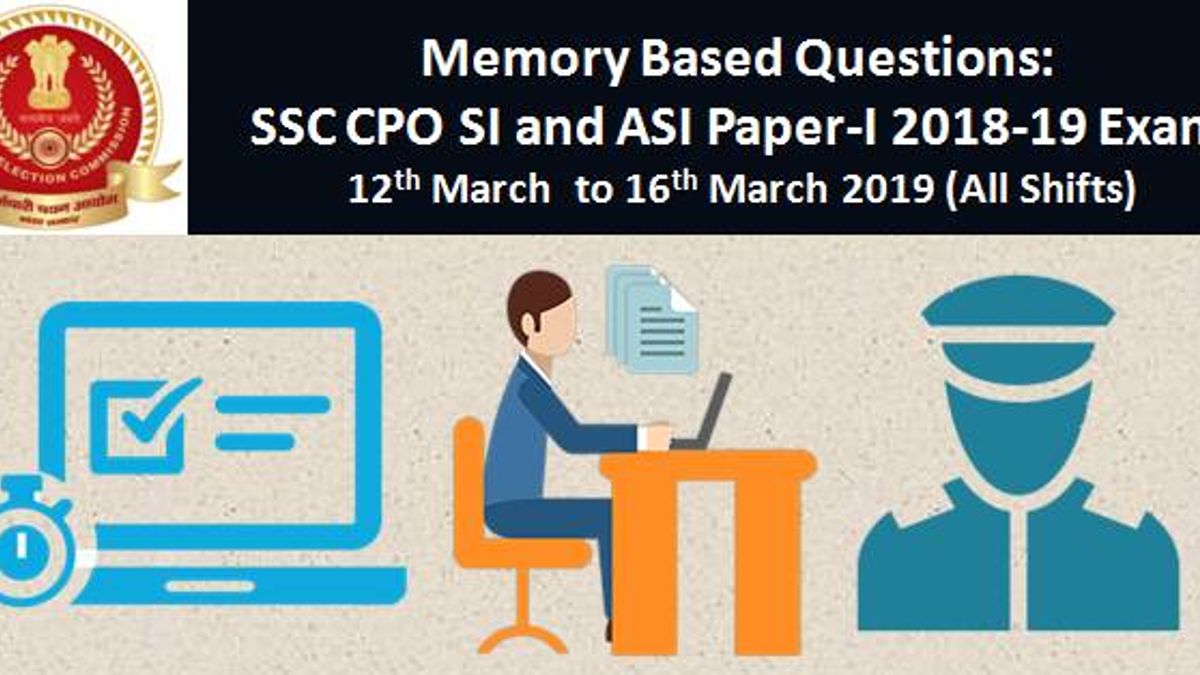 SSC CPO SI and ASI 2018-19 Online Exams have been started from 12th March 2019 and will last till 16th March, 2019. In this article we are going to share the important memory based Questions as per the feedback received by the candidates who have appeared for SSC CPO SI and ASI 2018-19 Online Exam. Candidates are advised to definitely cover these questions for scoring high marks in the Exam.

Let’s have a look at the Important Questions that are being covered in the SSC CPO SI and ASI 2018-19 Online Exam:

This section was mainly covered by Current Affairs Questions (15-20 Questions) and rest by GK questions (20-30 Questions). Below are some memory based questions from General Awareness Section of CPO SI and ASI 2018-19 Online Exam:

2. Where is Dachigam Wildlife Sanctuary located?

3. Which of following does not touches the border of Bangladesh:  Manipur, Tripura, Meghalaya, Mizoram?

4. TRAI was established under which Act?

Answer: Telecom Regulatory authority of India was established on 20 February 1997 by an Act of Parliament to regulate telecom services and tariffs in India.

5. Rauf dance is from which State?

8. Who is the author of the book ‘Origin of Species’?

9. Article 368 of the Indian Constitution deals with:

Answer: Article 368 (1) of the Constitution of India grants constituent power to make formal amendments and empowers Parliament to amend the Constitution by way of addition, variation or repeal of any provision according to the procedure laid down therein, which is different from the procedure for ordinary legislation.

11. Khajuraho was built by:

13. Which is the first State/UT banned plastic from 1 march?

14. When did Battle of Chausa fought?

15. What was the name of Swami Dayanand Saraswati when he was born?

This section covered questions from both verbal and non-verbal reasoning section consisting of total 25 Questions of easy to moderate level. Below are some memory based questions from General Intelligence and Reasoning Section of CPO SI and ASI 2018-19 Online Exam:

Directions (1 - 2): In each of the following questions, there is a certain relationship between two given words on one side of (: :) and one word is given on another side (: :) while another word is to be found from the given alternatives, having the same relation with this word as the words of the given pair bear. Choose the correct alternative.

Directions (3 - 4): Some groups of letters are given, all of which, except one, share a common similarity while one is different.

Directions (5 - 6): Choose the next number in the series from the options below:

9. Introducing ‘Rakesh’, Raj said, “he is the son of the only son of my grandfather”. How is ‘Rakesh’ related to Raj?

From the given information we get the following.

Hence, Preeti is the slowest runner.

12. In the following letter series, some of the letters are missing which are given in that order as one of the alternatives below it. Choose the correct alternative.

13. In the following question, choose the correct mirror image from the alternatives (a), (b), (c) and (d), when mirror is placed on the line AB.

Explanation: Option (b) is correct.

14. Choose a figure which would most closely resemble the unfolded form of the last question figure. 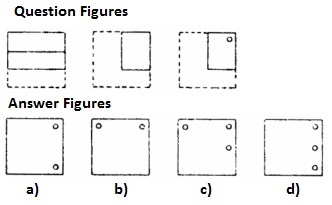 Explanation: Option (b) is correct.

15. In the following question, a part of question figure is missing. Find out from the given answer figures (a), (b), (c) and (d), that can replace the ‘?’ to complete the question figure.

16. In the question given below there are four figures given out of which three are similar or related in some manner. Find the figure which is odd one out.

17. Which letter replaces the question mark?

18. Two positions of a cube are as follows.

Point out which number will be on the top if number 3 is at the bottom.

Explanation: The correct answer is option (b).

This section covered topics from English Grammar, Vocabulary and Reading Comprehension Section (50 Questions). Below are some memory based questions from English of CPO SI and ASI 2018-19 Online Exam:

2. In the following question, the first word is given in capital letters followed by four other words, one of which is the antonym of the first word. Find the word.

Explanation: Infusion means the introduction of a new element or quality into something and ‘Separation’ is the exact opposite word.

Directions (3 - 4): The following sentences can be replaced with one word from the options given below them. Choose the correct word and mark as your answer.

3. Instrument used for measuring the force and velocity of winds

Explanation: Anemometer is an instrument for measuring the speed of the wind, or of any current of gas.

4. Arrangements of events according to dates or times of occurrence

Explanation: Chronology means the arrangement of events or dates in the order of their occurrence.

Directions (5 - 7): Each of the following sentences is divided in to four parts. Any of the parts may contain an error. Select the part that has an error. Select option (d), if you find no error in the sentence. Ignore punctuation errors if any.

Explanation: Replace ‘me’ by ‘my’.

Explanation: Remove ‘out’, as it is redundant.

7. Ever since the government (a)/ announced its new plans, (b)/ the private sector had run into heavy weather (c).

Explanation: Replace ‘had’ by ‘have’.

Directions (8 - 10): In the following questions each sentence has an underlined part that can be improved by replacing the part with one among the four options given below. Choose the correct option and if you think no improvements can be made, then select (d) as your answer.

8. I am will be leaving Delhi tonight and I will be back after a month.

a) To leave for

d) May be leaving

Explanation: The grammatically correct sentence would be “I am leaving for Delhi tonight and I will be back after a month”.

9. Although she always lived in India, but her ancestors are from Nepal.

a) Although she is

b) Because she has

d) Although she has

Explanation: The grammatically correct sentence would be “Although she has always lived in India, but her ancestors are from Nepal”.

a) you did spent

b) you didn't spent

d) you does spent

Directions (11 - 14): The following sentences have a certain phrase highlighted in bold. Choose the correct phrase from the options given below to replace the highlighted phrase and make it grammatically correct. Ignore punctuation errors if any.

11. My brother lives in Chennai, so I only get to see him twice in a blue moon.

a) Twice in a blue moon

b) Once in a blue night

c) Thrice in a blue moon

d) Once in a blue moon

Explanation: The phrase ‘Once in a blue moon’ means something that happens very rarely.

12. The company that looked so solid and dependable turned out to be a house of bricks.

a) A house of dead

b) A house of people

c) A house of cards

d) A house of stones

Explanation: The phrase ‘A house of cards’ means an organization or a plan that is very weak and can easily be destroyed.

13. Which of the following spellings is correct?

Explanation: Option (a) is the correct answer.

14. Which of the following spellings is correct?

1. What is the maximum number of people who can share 40 five-rupee notes, 32 ten-rupee notes and 16 twenty-rupee notes equally?

3. A train travels from X to Y at the rate of 35 km per hour and from Y to X at the rate of 55 km/hr. What is the average rate for the whole journey?

Let the length is x & perimeter be 6x

Let the breadth be B

Explanation: Let the original salaries of Ritu and Shweta be Rs. 2x and Rs. 3x respectively.

6. Ram buys an article costing Rs. 3924. The rate of sales tax is 9%. He tells the shopkeeper to give a discount on the price of the article to such an extent that she has to pay Rs. 3924 inclusive of sales tax. The discount required is:

8. Two numbers are less than a third number by 50% and 55% respectively. The per cent by which the second number is less than the first is:

10. Two trains starting at the same time from two stations 800 km apart and going in opposite direction cross each other at a distance of 460 km from one of the stations. What is the ratio of their speeds?

Explanation:  In same time, they cover 460 km and 340 km respectively.

For the same time speed and distance is inversely proportional.

11. Ram and Shyam can do a piece of work in 45 and 40 days respectively. They began the work together but Ram leaves after some days and Shyam finished the remaining work in 23 days. Then A has worked for:

12. A tap can fill a tank in 72 minutes and another can empty it in 36 minutes. If the tank is already half full and both the taps are opened together, the tank will be:

a) Filled in 9 minutes

Explanation: A pipe filled a tank in 72 minutes and another emptied in 36 minutes.

Directions (13-16): The following table shows the circulation (in thousands) of 5 Magazines in four major cities for the year 2014-2015. Based on the data, answer the questions below:

13. Which Magazine has the highest circulation amongst all?

14. What is the difference between the lowest two circulating Magazines?

The difference between magazine The Economist and Forbes India circulations is

16. What percentage of the total Magazines circulation is the circulation of Industry 2.0?

17. By how much percentage Forbes India increase its circulation to become the highest circulating Magazine amongst all?

Explanation: The difference between the circulation of Frontline and Forbes India is 111000. 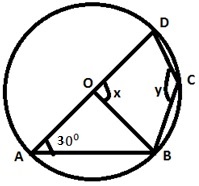 Explanation: ABCD is a cyclic quadrilateral

Clearly, △OAB is an isosceles triangle with OA = OB

19. In the given figure if PQ||RS, then find out the value of ∠PSR:

Explanation: When a transversal intersects two parallel lines then summation of one side angles will be 180°. 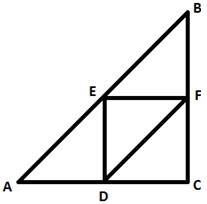 Therefore, AEFD is a Parallelogram.

Let the side of square = a

Radius of the circumcircle of square = (a√2)/2 and

Radius of the in circle of the square = a/2

As per the feedback shared by the candidates who have appeared this year for SSC CPO SI and ASI 2018-19 Online Exam, the questions asked in Reasoning, Maths, English and General Awareness Section were of Easy to moderate level. Candidates are advised to go through the above questions thoroughly for scoring high marks in this section.