UP Board Class 10 English Model Paper 2022-23: Directly Download the PDF

UP Board Class 10 English Model Paper 2022-23: Download the latest model paper for English released by UPMSP for UP Board class 10 examinations in the year 2023.

UP Board Class 10 English Model Paper 2022-23: Uttar Pradesh Madhyamik Shiksha Parishad recently released the Model papers for the students of class 10. The model papers for most of the subjects are available on the board’s official website. Students who are going to appear for the board examinations of UP Board in the current academic year must make use of these model papers to understand what kind of questions can be asked in the exam.

The course code for English model paper for class 10th is 917. The English language paper is for 70 marks and the time allotted for it is 3 hours 15 minutes.

The paper begins with the general instructions to be followed by the students.

The general instructions to be followed are:

Before diving straight into the model paper, students should acquaint themselves with UP Board class 10 English Syllabus for 2022-23.

(Q.1-3): Read the following passage carefully and choose the correct option to answer the questions that follow

This is a great lesson for all of us to learn, that in all matters the two extremes are alike. The extreme positive and the extreme negative are always similar. When the vibrations of light are too slow we do not see them, nor do we see them when they are too rapid. So with sound, when very low in pitch we do not hear it, when very high we do not hear it either. Of like nature is the difference between resistance and non-resistance. One man does not resist because he is weak, lazy and cannot; the other man knows that he can strike an irresistible blow if he likes, yet he not only does not strike but blesses his enemies. The weak who shows non resistance is oppressed while the stronger one commits a sin if he offers resistance.

Q.1. We are unable to hear a sound if

b) it is too high

c) it is too noisy

a) extreme positive is better than extreme negative.

b) excess of anything is not good.

c) we get almost the same result in both situations.

d) all of the above.

Q.3. Which word in the passage is the opposite of ‘slow’?

(Q.4-8) : Choose the correct option to answer the following -

Q.5. If you want to know about new things you are –

Q.7. Which of the following words is misspelled?

(Q.9-10) : Read the passage given below. Choose the correct option to answer the questions that follow-

I finished my poem, and it was beautiful! It was about a mother duck and a father swan with three baby ducklings who were bitten to death by the father because they quacked too much. Luckily, Mr. Keesing took the joke the right way. He read the poem to the class, adding his own comments, and to several other classes as well. Since then I’ve been allowed to talk and haven’t been assigned any extra homework.

a) children and parents

b) Anne and Mr. Keesing

b) Anne was poor in Maths.

c) Anne had misbehaved with him.

d) Anne talked too much in the class.

(Q.11 – 13) : Choose the correct option to answer the following questions

a) a large freshwater fish

b) a small freshwater creature

(Q. 14-15) : Read the given extract and choose the correct option to answer the following questions:

Stop that slouching and sit up straight, Amanda !

a) Amanda is an unruly girl.

d) he wants to scold Amanda.

Q.16. It was a temptation to keep Tricki on as a permanent guest because –

a) Mrs. Pumphrey did not want Tricki back.

b) Tricki did not create problems.

c) Tricki was not recovering fast.

d) Mrs. Pumphrey sent a lot of eatables that the doctor enjoyed.

b) cook, write and add numbers.

Q.18. The book gifted to Ebright by his mother was –

a) The Travels of Monarch Butterflies.

b) The History of Monarch Butterflies.

c) The Travels of Butterflies.

d) The Travels of Monarch X.

Q.19. Which of the following combinations describes Matilda?

Q.20. Bholi was sent to school because –

a) her father felt compelled to do so.

b) her mother wanted her to get educated.

c) everybody else sent his daughters to school.

d) it was necessary for her marriage.

Q.1. Read the following passage and answer the questions that follow-

When we enter New York harbor, the first thing we see is the Statue of Liberty. What impresses us the most is its size and magnificence . Have you ever wondered how it came to be there? The Statue of Liberty was a gift from the people of France to mark the one hundred year anniversary of American Independence. In 1869, sculptor Frederic Auguste Bartholdi began to plan his concept for the monument. Bartholdi envisioned Liberty as a strong and proud figure, one who personified not only the majestic Greek goddesses of the past, but also the working men and women of the present. Finally in 1884, the work was finished and Liberty was packed into 214 crates and sent to New York city. But there was one problem. While the French had raised a lot of funds to build the statue, New York had not secured the funds to build its foundation. It was not until a New York newspaper implored people for donations that money became available. Finally, on 28th October 1886, Americans celebrated the unveiling of Statue of Liberty.

a) Whom does the Statue of Liberty represent?

b) What is meant by the underlined portion?

c) How did America collect money to install the statue?

d) Which word in the passage means ‘requested’?

Q.2. Write a letter to your elder brother who lives in Delhi, sharing your feelings about how you miss him at home.

Write an application to the Principal of your school to complain that the water tanks in the school are not being cleaned regularly.

Look at the picture given below. Taking clues from it write an article on ‘Advantages and Disadvantages of Internet’ in about 80- 100 words. 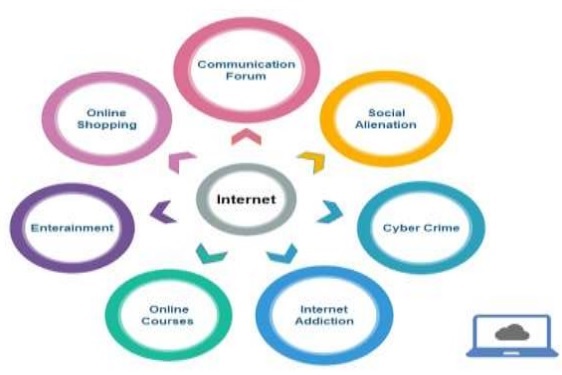 4 - a) Rewrite the following sentence by changing into indirect speech-

Kiran said to her mother, ‘Please allow me to play.”

b) Change the following into passive voice-

I know you very well.

the gardener said to me do not touch the flowers

d) Translate the following into English-

Q.5. Answer the following questions in about 30-40 words each.

a) Mention varieties of bread that are an essential part of celebrations in Goa.

Who was Anne Frank? Where did she write her diary?

b) How did Valli save money for the bus ticket?

Why was Lencho angry with the post office employees?

a) What lesson did Kisa Gautami learn in the end?

b) How did Mandela’s idea of freedom change with age and experience?

Write four lines of any poem prescribed in your syllabus. (Do not copy the lines given in this question paper)

a) Fire and Ice

a) What did the doctor do to cure Tricki?

b) What did Griffin want to prove? Could he do that?

a) What could have happened if Matilda had not lost the necklace?

b) Suppose you are Bholi and now you are a teacher. Write about your family, your childhood and your present life.

ALSO CHECK: UP Board Class 10 Syllabus 2022-23: Download PDF for All Subjects