Check most important questions on facts related to Australia in this article. Aspirants of UPSC Civil Services Prelims 2021 exams can solve these questions to test their knowledge of World Geography. 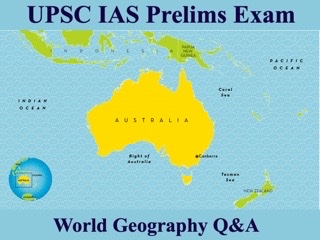 Australia is the world’s largest island and smallest continent. It is the only nation that completely covers a continent. Its total area is nearly double that of India and Pakistan combined. It lies entirely in the Southern Hemisphere and is aptly named – Austral meaning south. It is located between the Indian and Pacific Oceans, stretches west to east from 114°E longitude to 154°E longitude and from 10°S to 40°S latitude.

Which of the given statement is/are correct?

Ques 2: Which of the following imaginary line passes through the middle of the continent?

(a) Tropic of Capricorn

(b) Tropic of Cancer

Ques 3: Which of the following water bodies does not surround Australian Continent?

Ques 4: Consider the following statements regarding The Great Barrier Reef:

Which of the given statements is/are not correct?

Ques 5: The term “Oceania” often seen in news is related to:

(a) A sum of all the ocean water together

(b) Indian and Pacific Ocean together

(d) Australia and New Zealand together

Ques 6: Which of the following river runs through the city of Perth?

Ques 7: Who among the following discovered Australia for the first time in 1770?

Ques 8: The name Australia is derived from the Latin word “Australis” which means ______.

Ques 9: Which of the following countries is not a part of Melanesia region in the pacific ocean?

Ques 10:  Which of the following statements is true regarding mineral wealth of Australia