Mother’s Day 2022: Mother's Day is observed annually to celebrate motherhood in various countries. Mothers are precious and the best gift of God. One day is not enough to thank your mother for her love. This year, Mother's Day is celebrated on May 8 (the second Sunday of May). Take a look at the history and significance of the day.

Therefore, Mother's Day is celebrated annually on the second Sunday of May. This year it falls on May 8. Let us read about the history of Mother's Day to better understand its significance.

In several parts of the country, it is also celebrated in March. Mother is a person who can’t be forgettable. Because of them, life exists on Earth. So, let us honour all Mothers of the world and celebrate it together.

On this day various gifts are presented, campaigns are organised, and several phone calls are made for wishing mother to make her feel special.

It is said that a young Appalachian homemaker namely Ann Jarvis in 1858, organised "Mother's Work Days" to improve the facility of sanitation and the deaths that were caused due to insects and seepage of the polluted water.

Further, over a century ago, women's suffragist, a Boston poet Julia Ward Howe established a special day for mothers and for peace that was somewhere missing after the bloody Franco-Prussian War.

After unsuccessful efforts, she started thinking globally and at an international pacifist conference after the Franco-Prussian War, she made a global appeal to women.

During the war itself she wrote, she keenly felt the "cruel and unnecessary character of the contest". She believed that as any woman might it could have been settled without bloodshed. Also, she always wondered why women or mothers are not putting their voices together in these matters to prevent the waste of that human life which they alone bear and know the cost.

However, at that time Mother's Day's voice for advocating peace was successful in Boston but after several years eventually lost popularity and disappeared from the minds of the people in the years preceding World War I.

Then, Ann Jarvis who is also famous as "Mother Jarvis" was a community health advocate. During the Civil War, she organised Women's brigades and asked her workers to help mothers and what they can do best for them. Not only this she had also organised various Mother's Day clubs that addressed child rearing and public health issues. In 1868, she took the initiative to heal the problems between her Confederate and Union Neighbours. 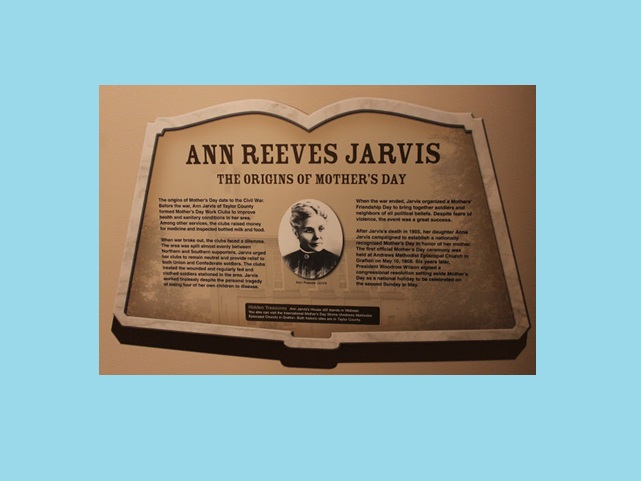 Anna Jarvis, daughter of Jarvis in 1878 at the age of twelve listened to her mother teaching Sunday school lessons on mothers in the bible. The senior Jarvis said that she hopes that "someone, sometime, will find a memorial mother's day". Further, she said that "there are many days for men, but none for mothers".

After the death of Ann Jarvis in 1905, her daughter Anna campaigned for a national observance holiday in honour of her mother. Who had made several contributions to improving health issues etc. for women? Therefore, Anna Jarvis wanted to commemorate her and the work of all mothers.

Anna Jarvis wrote several letters to President William Taft and former President Theodore Roosevelt. In 1907 May, the Methodist Church in Grafton, West Virginia, the place where Anna Jarvis's mother taught had arranged Mother's Day service on the second Sunday of May. Also, the same service was organised at the Wannamaker Philadelphia merchant Auditorium and it was completely full of 15,000 people who showed interest.

In 45 states with Puerto Rico, Hawaii, Mexico and Canada this custom spread to churches. In 1912, the Governor of West Virginia proclaimed Mother's Day and in 1913, Pennsylvania's Governor also did the same. In the US in 1914, it became an official holiday when president Woodrow Wilson proclaimed the second Sunday in May as a day to pay honour to motherhood, to express the love and affection for the mothers of our country who had given us life to live on this beautiful planet.

However, the contributions of women can never be forgotten as it nourishes our family, she is the person who takes care of everything at home and even outside. No doubt her job is 24x7. Perhaps there are multiple ways to give tribute to the mothers and not only this day but we should respect them every day, every year and years. She should get respect in our society and we all should think about it.

READ| Important Days and Dates in May 2022