International Firefighters' Day (IFFD) 2020: This day recognises the sacrifices of firefighters who make ensure that their communities and environment are as safe as possible. On this day we thanked current and past firefighters for their contributions.

We can’t ignore that firefighters dedicate their lives to the protection of life and property. Sometimes their work is so fearless that they even climb a tree in a burning forest to save a defenceless animal and it was so frightened to come down on its own. Isn't it! These types of things, actions firefighter’s do every day. In all cases, it risks the ultimate sacrifice of a firefighter's life. For us, they are the saviours of life but it is a part of their job. This day is to celebrate the courage and brevity that these men and women show.

International Firefighter's Day (IFFD) is a time where the community of the world recognise and honour the sacrifices of the firefighter's who make their communities and environment as safe as possible.

This day is to remember those firefighter's who have died while serving our community or dedicated their lives to protecting the safety of us all. Also, it is the time to show appreciation and support to the firefighter's worldwide who continue to protect us so well throughout the year.

In Ancient Egypt, the first organised professional for firefighter's was to combat structural fires but that time firefighters worked for private companies and they provide the services to those only who can afford it. Later, in Ancient Rome, Ceasar Augustus revolutionised fire fighting by calling for the creation of fireguard which was known as Vigiles, they were trained, paid and equipped by the State.

In 1999, Firefighters' Day was created when 5 firefighters' died tragically during a wildfire at Linton in Victoria, Australia. They were died due to the sudden change in the direction of the wind and so they were engulfed in flames.

Why is International Firefighters' Day (IFFD) celebrated on 4 May?

What is the symbol of International Firefighters' Day (IFFD)? 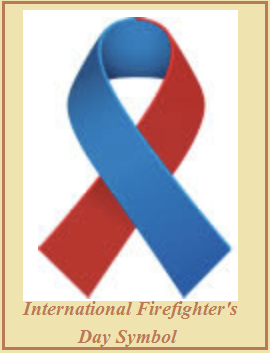 The symbol for International Firefighters' Day is a red and blue ribbon. The red colour symbolises fire and blue water. These colours also signify emergency services around the world.

People bring a cake to pave gestures to the firefighters in the fire hall. Some donate money as a charity, some help firefighter if injured in the line of duty, give medical treatment if required for their better health. Charities done for firefighter’s help retired firefighters and their family to live a comfortable life after so many years of risk that they took for us. Even several communities, organisation raise awareness about the dangers that firefighters face bravely by wearing a red and blue ribbon.

One of the main aspects to celebrate this day is fire prevention and the need for more intensive and thorough training. In all over the world Firefighters and their agencies are constantly working and doing prevention whether in schools, at the public, community, at assemblies etc. So, we should thank firefighters for their brave work and courage.