Math Riddle: Can you calculate the number of cards Alexander had in the first round of Cartoku?

Cartoku is a card game. Solve this math riddle to find the number of cards Alexander had at the end of the first round. Hurry Up!

Math riddles are entertaining puzzles that put your brain to the test. They frequently involve numbers or letters that are related in some way. For instance, you could be asked to determine whether two words share a letter or a number.

Math riddles are excellent for honing your math skills, particularly if you find it difficult to do basic arithmetic. The task is to solve them through logic and reasoning. Try this math riddle to hone your problem-solving abilities.

Recently, Alexander sat to play Cartoku with his friends. And he won at last even after losing the first end.HOW?

What is the math puzzle?

Check these Math Riddles that only High IQ Genius can Solve

Can You Find The Number Of Cards Alexander Had At The End Of The First Round?

Look at the mat riddle posted below. 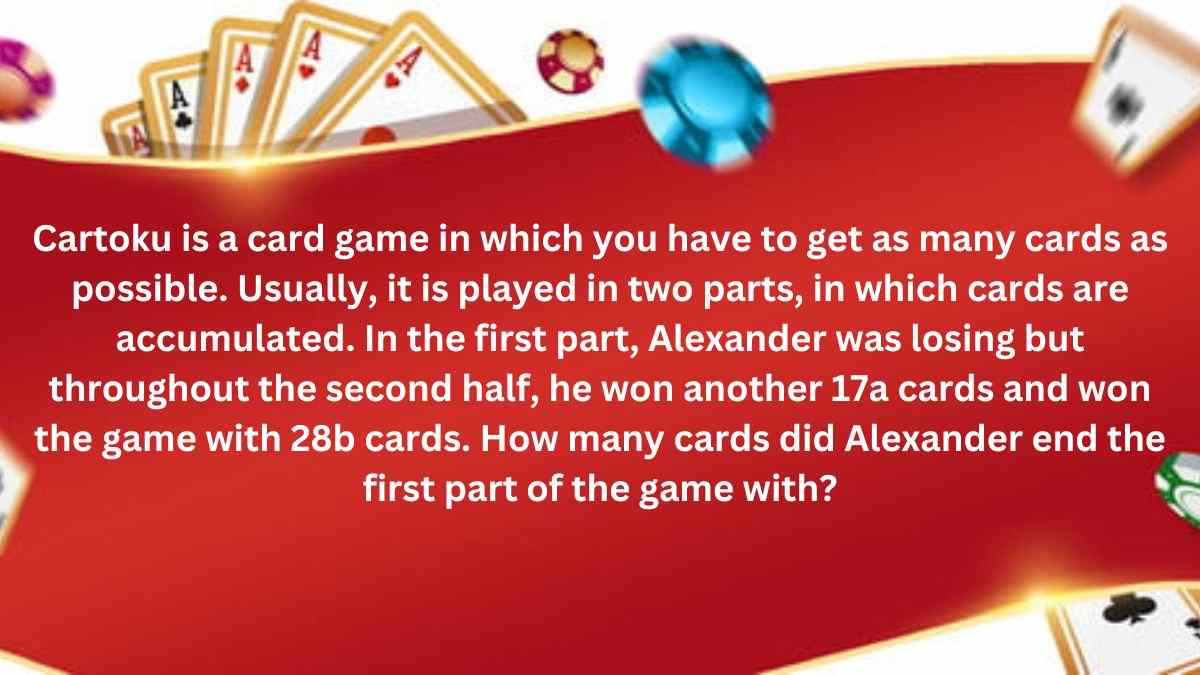 Can you solve this riddle?

Find this too easy?

Fine, let’s turn this into a challenge.

Set a timer to 07 seconds and try to find the answer within the allotted time.

You must have figured out the answer by now. If you have, congratulations are in order. We knew you could do this.

Still, we are going to reveal the answer so you can cross-check your answer.

We have been asked to change only one number in the word problem so that the number of cards that Alexander has at the end of the first part of the game is 6. We are told that he has won 17 cards during the second half and finishes the game with 28 cards. In order to know how many cards he had in the first part we should subtract what he won during the second part from the total number of cards he ended the game with, in other words, 28 – 17 = 11. Since we have been asked to make sure the answer is 6 and can only change one data, we have two valid options.

Note: Probably, this can have more than one solution.

Hold on, it is just not the last one. Bookmark Jagranjosh to never miss any of the Math Riddle.