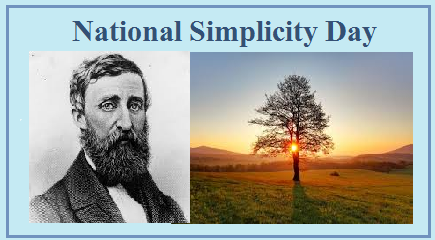 Henry David Thoreau was born on 12 July, 1817. National Simplicity Day is observed in honour of the birthday of Henry David Thoreau,  He encourages to step back and look the ways to simplify life in such a busy lifestyle. This provide us an opportunity to eliminate the unnecessary burdens that weigh us down.

"As you simplify your life, the laws of the universe will be simpler". - Henry David Thoreau

Henry David Thoreau was an American author, an environmentalist, philosopher, naturalist, poet, historian, surveyor and a transcendentalist. He is best known for his book Walden which is a reflection upon simple living in natural surroundings and his essay Resistance to Civil Government also known as Civil Disobedience, an argument for disobedience to an unjust state.

National Simplicity Day was born out of a need to be free from the complications of the world and to allow ourselves to just be simple. This day focuses to step away from the technology, unnecessary stress and to enjoy life in a simple way as it is. Don't make life complicated.

“Simplicity is the essence of happiness.”– Cedric Bledsoe

“Enjoy the little things, for one day you may look back and realize they were the big things.”– Robert Brault

Walden book of Henry David Thoreau: At a Glance

- Walden of Henry David Thoreau is an account of the two years during which he built his own cabin, raised his own food and lived a simple life in nature in the woods near Concord in Massachusetts. There, he grew his own vegetables and gained several experiences from nature. These experiences he used to examine the fundamental elements of identity and mentioned them in the book Walden.

- On Walden Pond, he had built himself a small cabin. The land does not belong to him but with the permission from the owner he did.

- To sustain life there, he grew and sells vegetables. He ate rye bread, salt pork, rice and potatoes.

- There, he is free to think about the nature of human consciousness.

- Amazing is that when he left the place, he was satisfied and has proved that human beings can live simply without technologies or the trappings of the modern world.

Walden book tells about life in various perspectives. Thoreau observed and appreciated the nature and penned his experiences in the book. Walden is one of the early attempts to put before a Western audience the Eastern values of mindfulness, detachment, simplicity, and living in the present moment. Thoreau also gave detail about how much it cost to keep himself alive and healthy during his stay at Walden. No doubt this book revealed the early roots of the science of ecology.

Thoreau said, "Our lives are frittered away in details...simplify,simplify" meaning that people are concerned too much by insignificant things and not those that are truly important.  He wrote, "As you simplify your life the laws of the universe will be simpler, solitude will not be solitude, poverty will not be poverty, nor weakness weakness."

Tips to simplify the Life by Henry David Thoreau

- No need to complicate the life, don't be stressed out, dissatisfied and unhappy. There are solutions for every problem.

- Focus on the essential facts of life.

- Discover what is important for you and make a list which will consist of things, goals and activities. He further focus that don't miss the small achievements.

- Don't buy things unnecessary for all wrong reasons. Identify the important thing and get rid of the rest.

- Put a ban on impulsive buying.

- To have clarity on what is important, let go unnecessary conditions and tune into what you value most.

- Live away from technology...Unplugged your devices. Do something different.

“Our life is frittered away by detail… simplify, simplify.” — Henry David Thoreau

Important days and dates in 2019 year