Panipat Battles: All you need to know

Battles of Panipat have its history and Importance in India. Do you know how many battles of Panipat were fought and in between whom? What is the reason behind the battles and its consequences? Let us find out! 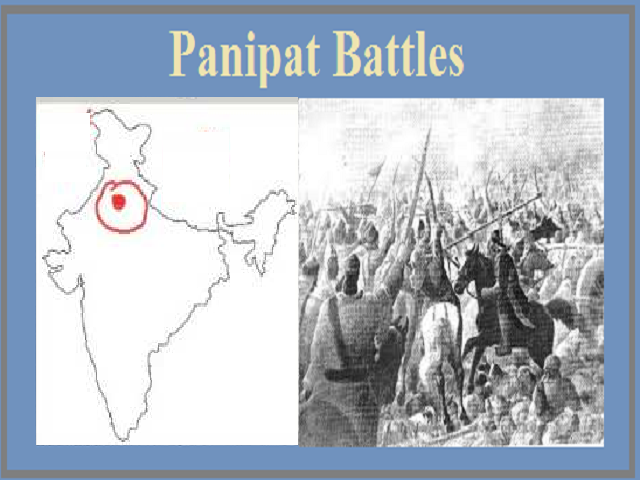 Panipat is situated in the north of Delhi and is the location of three historic battles that shaped Mughal history.

Fought between: Babur and Ibrahim Lodhi

On 21 April 1526, the First Battle of Panipat took place between the invading forces of Babur and the Lodhi Empire. This battle saw the emergence of Mughal rule and gave a stronger foothold on the subcontinent. According to the legends, it was the earliest battles in which gunpowder firearms and field artillery were used.

About the Battle in Detail

The Babur was the Timurid ruler of Kabulistan and in 1526 defeated the Sultan of Delhi, Ibrahim Lodhi's huge army. The battle took place near the small village of Panipat, present-day Haryana state. No doubt the area has been the site of several decisive battles for the control of Northern India since the 12th Century.

It is estimated that the forces of Babur were numbered around 15,000 men and 20 to 24 pieces of field artillery. According to the Babur estimation, Lodhi had around 100,000 men, included camp followers and the fighting force was around 30,000 to 40,000 men in total with at least 1000 war elephants.

What are the advantages of using Cannons in the Battle?

It is correctly seen that Ibrahim Lodhi had a huge army then also he was defeated by the Babur. It is due to field artillery, cannon. The sound of cannon was so loud that it frightened Ibrahim Lodhi's elephants and trampled Lodhi's men. It is also said that apart from the guns and all, it was a Babur tactic that gained him the victory. Let us tell you that the new war tactics that were introduced by Babur were the tulughma and the araba. Tulughma is dividing the whole army into several units like the Left, the Right and the Centre. The Left and Right divisions were further divided into Forward and Rear divisions. Due to this, a small army was able to surround the enemy from all sides. The Centre forward division was provided with carts (araba) which were placed in rows facing the enemy and tied to each other with animal ropes.

In the battle itself, Ibrahim Lodhi died on the field, abandoned by his feudatories and generals.

Important Battles And Wars In India

It can be said that the Second Battle of Panipat marked the beginning of Akbar's reign in India because it was the first year of Akbar holding the throne.

Background of the Battle

Mughal ruler Humayun died in Delhi on 24 January, 1556 and succeeded by his son Akbar. That time Akbar was 13 years old. Akbar was enthroned on the throne as the king on 14 February, 1556. Let us tell you at the time of accession Akbar was confined to Kabul, Kandahar, parts of Delhi and Punjab. Akbar with his guardian Bairam Khan was campaigning in Kabul.

In the battle for Delhi Akbar/Humayun was defeated by Samrat Hem Chandra Vikramaditya or Hemu. He was an adviser earlier to Sher Shah Suri's son Islam Shah from 1545 to 1553 and belonged to Rewari (present-day Haryana). From 1553 to 1556, Hemu won around 22 battles as Prime Minister and Chief of Islam Shah and defeated Afghan rebels against the Sur regime.

In January 1556, when Humayun died, Hemu quelled a rebellion in Bengal, killing the ruler of Bengal Muhammad Shah in the war. He started a campaign of winning battles in Northern India. He attacked Agra and as a result, the commander of Akbar's forces fled without fighting. Finally, the area of Etawah, Kalpi and Agra provinces came under the control of Hemu.

Hemu moved to Delhi and stationed his forces outside the city of Tughlaqabad. On 6 October, 1556, the army encountered Mughal resistance. After fierce battle forces of Akbar were ousted and the commander of Mughal forces Tardi Beg escaped that allowed Hemu to capture Delhi. Do you know in the battle around 3000 Mughals were killed. On 7 October 1556, Hemu was crowned at Purana Quila and established Hindu rule in North India after 350 years of Mughal dominance. He was bestowed with the title of Samrat Hem Chandra Vikramaditya.

About the Battle in detail

For the Second Battle of Panipat the situation was created and 5 November 1556, Akbar's army marched towards Delhi and battle was fought between both the armies. According to some legends, Akbar's guardian and Akbar itself did not participate in the battle. Akbar at the age of 13 years was not permitted to take part in the battle and was provided with a special guard protection of around 5000. He was also instructed by Bairam Khan to flee towards Kabul for life in case the Mughal army was routed on the battlefield.

Hemu led his army himself and he had around 1500 elephants and a vanguard of Artillery Park. Hemu marched with around 30,000 horsemen and Afghans. On the other side, the Mughal army consisted of 10,000 cavalries, out of which 5000 were experienced, veteran soldiers. Hemu's army was on the winning side of the battle but according to Badaoni "Suddenly the arrow of death which no shield can ward off struck his (Hemu) squinting eye so that his brain passed cleanout from the cup of his head, and he became unconscious and not to be seen in his area. Not seeing Hemu in his area, Hemu’s army was in disarray and defeated in the ensuing confusion".

After several hours, Hemu found dead and brought to Akbar's tent camp at village Saudhapur in Panipat by Shah Quli Khan Mahram. The battle established the strong Mughal Empire and the reign of Akbar started.

Fought between: The Maratha Empire and a coalition of the King of Afghanistan, Ahmad Shah Durrani with two Indian Muslim allies namely the Rohilla Afghans of the Doab and Shuja-ud-Daula, the Nawab of Oudh.

Let us tell you that the battle is considered one of the largest battles fought in the 18th century and also the largest number of fatalities were reported in a single day.

About the Battle in detail

The Marathas attacked Abdali on 14 January, 1761. During the course of battle, Malhar Rao Holkar fled away. The Abdali's army was damaged by the artillery of Ibrahim Gardi. By the evening, the Marathas were badly defeated, most of the Maratha's soldiers were killed and the rest of them fled away.

The battle continued next day also. Several important rulers of Marathas including Bhau, son of the Peshwa, Viswas Rao, Jaswant Rao Pawar, Sindhia, etc. were killed in the massacre. The main cause of the defeat of Marathas was the failure of Bhau and the superiority of Abdali against Bhau as a commander. In Maratha's camp, there were several women and servants which was also burdened to Maratha's army.

The Maratha's force numbered around 45000 and Abdali army consisted of nearly 60,000 soldiers.

After losing control over Doab for Bhau, he felt the scarcity of supplies. He wasted three months in the battle with Abdali at Panipat and worst was that from the last two months, the Maratha army was semi-starved. The Marathas also do not use their guerilla technique of warfare and depended on the artillery under Ibrahim Gardi. No doubt Abdali had better cavalry than the Marathas.

On the other hand, Bhau failed to get the support of the Rajputs and the Jats and is also one of the causes of defeat in the battle. According to Sardesai, the Marathas suffered the loss of life but the power of the Marathas was not destroyed nor did any change come in their ideal.

In the battle, the Marathas also lost their ablest leaders like Raghunath Rao, etc. that had also opened the way for defeat. Peshwas were become weakened in the battle and led to the disintegration of the Maratha Empire.

For some time, Sindhia remained the protector of the Mughal Emperor but the Marathas failed to strengthen their hold over the North. Therefore, the British could get the chance of eliminating the French in India and capture power in Bengal.

Therefore, we can say that all three Battles of Panipat have their own reasons and significance.

Mughal Empire:Contribution in Arts and Architecture