31 March: Timeline of events in the World History 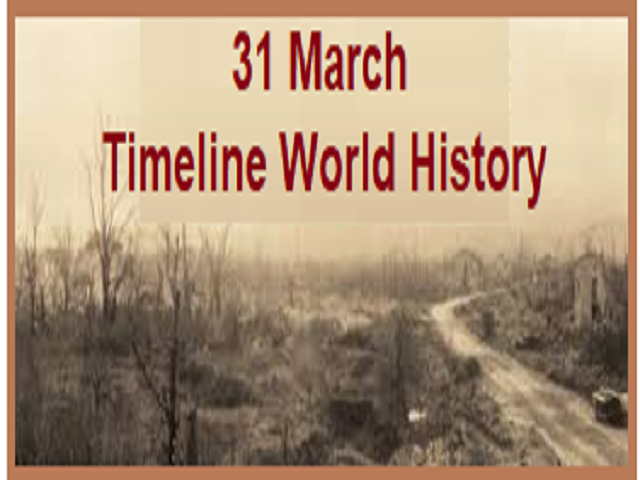 31 March date marks the beginnings and ends of several events of historic importance that may have impacted people up to a great extent or created a new history. On this date, first-time African-American cast his vote. This was a big event in history. In India also 31 March has its own significance that is on the same date in 1990, Dr. Bhimrao Ambedkar, the architect of the Constitution, was posthumously awarded the highest civilian award Bharat Ratna.

1504 - Birth of Sikh Guru Angad Dev Ji. He was born at Matae di saran, Mukatsar, district Ferozepur in the house of Pheru Mal and Matta Sabra. He was the second Guru of the Sikhs after Guru Nanak Dev Ji.

1727 - Isaac Newton, one of the world's greatest physicists, died in Kensington, Middlesex, England at the age of 84.

1774 - Postal service started in India, the first post office opened. On 31 March, 1774 at Calcutta the Post Office Department of the East India Company was first established.

1811 - German chemist Robert Wilhelm Bunsen was born in Gottingen, Westphalia. He observed that each element emits a light of characteristic wavelength.

1854 - U.S. Commodore Matthew Perry signed the Treaty of Kanagawa in Japan that ends the country's period of seclusion.

1889 - The 300-metre Eiffel Tower was officially inaugurated in Paris in 1889. It was a wrought iron technological masterpiece created by Gustave Eiffel.

1921- In AICC session in Vijayawada, the draft design of the flag was submitted to Mahatma Gandhi. He had presided the session at the Victoria Museum. It first served as the Congress flag but after few changes later, it was adopted as the national flag a month before Independence.

1959: Tibetan religious leader Dalai Lama along with 20 of his disciples reached the border of India. On March 17, he left Tibet on foot from Lhasa, the capital of Tibet, and reached India safely via the Khenziman Pass.

1964: The electric tram was shut down in Bombay.

1980: Death of legendary American sprint runner Jesse Owens. Owens was am American track-and-field athlete who set a world record in the running broad jump or long jump that stood for 25 years and won four gold medals at the 1936 Olympic Games.

2004: At least 175 people killed in a fire in a nightclub in Buenos Aires, Argentina and more than 700 were injured.

These are some events in the world history that took place on 31 March.