Who Is Viktor Bout? The Notorious Russian Arms Dealer Known To The World As The ‘Merchant Of Death’

The notorious Russian arms dealer Viktor Bout, also known as the merchant of death, has been released from US custody. Bout’s release was part of a prisoner exchange with Brittney Griner, a US basketball star.

Saumya Updated: Dec 9, 2022 12:59 IST
Who Is Viktor Bout? The Notorious Russian Arms Dealer Known To The World As The ‘Merchant Of Death’

Viktor Bout, one of the most nefarious arms dealers in the world, has been released from US custody in exchange for Brittney Griner, the star basketball player of the US.

Viktor Bout, also known as the Merchant of Death, has reportedly reached Moscow, Russia as of Thursday (December 8). Bout has been in US prison for over 12 years.

According to US President Joe Biden, Griner is safe and returning home from the United Arab Emirates on a plane.

He stated at the White House, "I'm delighted to hear Brittney's in excellent spirits... she needs time and space to heal.”

Griner was detained in February at a Moscow airport for having cannabis oil in her possession, and last month she was transferred to a prison camp.

Who is Viktor Bout aka the Merchant of Death?

Viktor Bout, a Russian national who was born in Tajikistan during the Soviet administration, started working in air transport in the early 1990s, following the disintegration of the Soviet Union.

As the USSR fell apart in the 1990s, he amassed a fortune by gathering abandoned aircraft built in the Soviet Union that were dispersed over many airports.

Bout is charged with utilizing abandoned Antonov and Ilyushin aircraft built by the Soviet Union to transport weapons to crisis areas.

Viktor Bout received his notorious moniker, the Merchant of Death, from British Foreign Office Minister Peter Hain, as a result of his supplying weapons to fighting parties in places including eastern Europe, Angola, Afghanistan, West Asia, the Central African Republic, and Sierra Leone, among others nations.

Bout asserts that in addition to providing weaponry, he also assisted the French government with aid efforts during the Rwandan genocide and also assisted UN peacekeepers.

He was identified by the UN as a companion or associate of Charles Taylor, the former president of Liberia, who was found guilty in 2012 of complicity in war crimes committed during the civil conflict in Sierra Leone.

According to Middle Eastern media accounts, he was also a gunrunner for terrorist groups Taliban and al-Qaeda.

He is accused of providing weapons to warlords and governments in countries ranging from the Democratic Republic of the Congo and the Central African Republic to Sudan and Libya, as well as arming both sides in the civil conflict in Angola.

In 2011, a Manhattan court found Bout guilty of providing anti-aircraft missiles, conspiring to assassinate Americans and US officials, and assisting a terrorist organization.

In 2008, a paid informant of the US Drug Enforcement Administration negotiated with Bout under the pretense of buying 100 9K38 Igla surface-to-air missiles and armor-piercing rocket launchers to be parachuted in by Bout to prearranged landing spots in Colombia.

The informant claimed to speak for the Colombian rebel group FARC, supposedly independently of the CIA. 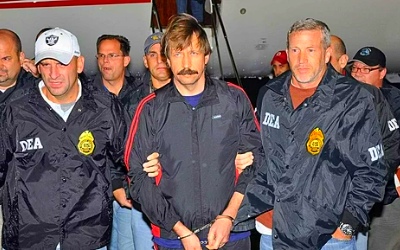 Bout was invited to Thailand by the imposters to meet their leader.

In March 2008, Bout was in Bangkok, Thailand by the Royal Thai Police after the US requested an Interpol red alert on a conspiracy to provide financial or material support to a foreign terrorist organization.

On November 16, 2010, Bout was extradited from Thailand to the United States over objections from the Russian authorities. After his conviction in 2011, the US extradited him and gave him a 25-year prison sentence. From 2012 to 2022, he was imprisoned for ten years before being freed.

Also Read | What is Red Notice & How Does it Help Interpol in Reducing Crime of the World?

Viktor Bout has been the inspiration for many books and movies. Allegedly, Bout's personal background and black market activities are the basis for the 2005 movie Lord of War.

In 2007, Stephen Braun and Douglas Farah published a book about Bout: Merchant of Death: Money, Guns, Planes, and the Man Who Makes War Possible

Tony Stark (Robert Downey, Jr.), in the 2008 Marvel film Iron Man, goes by the moniker "The Merchant of Death."

Bout has reportedly reached Moscow and has plans to open an art exhibition in Saint Petersburgh, Russia.

Related | What Happened To Jeffrey Dahmer, The Notorious Serial Killer?