India year book provides details on the most authentic government initiatives and policies that can be directly asked in the IAS prelims exam.

Hence, it is important for IAS aspirants to cover the environment chapter of the India year book so as to better understand the latest government initiatives in conservation.

•  The name of the Central Board was amended to Central Pollution Control Board (CPCB) under the Water Amendment Act, 1988.

•  The enactment of the Environment (Protection) Act, 1986, which is umbrella legislation for the enforcement of measures for the protection of the environment and several notifications of rules under the Act, widened the scope of activities of the Central Board.

•  The Environment Ministry has decided to grant the recognition to the environmental laboratories subject to fulfilling the criteria which include such as that all environmental laboratories should have either ISO 17025 or ISO 9001 along with OHSAS 180001 certification before submission of application for consideration of recognition under Environment (Protection) Act, 1986 duly authenticated by the State Pollution Control Board.

•  The applicant is required to submit an undertaking that all activities of the laboratory in totality are being carried out as per ISO 17025 or ISO 9001 along with OHSAS 18001.

•  The concept of the Common Effluent Treatment Plants (CETPs) arose in order to make a cooperative movement for pollution control.

•  The main objective of the CETPs is to reduce the treatment cost to be borne by an individual member unit to a minimum while protecting the environment to a maximum.

•  Wastewater treatment and water conservation are the prime objectives of the CETP.

•  The concept of CETPs was envisaged to treat the effluent emanating from the clusters of compatible small-scale industries.

The National Air Quality Index (AQI) has been launched in 2015.

•  AQI is a tool loaded in the web portal of the Central Pollution Control Board (CPCB) for public information on the status of ambient air quality in selected cities.

•  Each of these categories is decided based on ambient concentration values of air pollutants and their likely health impacts.

•  The National AQI is a significant tool helping the country in decision supporting system as a part of e-Governance measures.

The Working Group constituted for categorisation has developed the criteria of the pollution index.

The salient features of the ‘Recategorization’ exercise are as follows:

•  The Hazardous Substances Management Division (HSMD) is the nodal point within the Ministry for the management of chemical emergencies and hazardous substances.

•  The main objective of the programme is to promote the safe management and use of hazardous substances including hazardous chemicals and hazardous wastes, in order to avoid damage to health and the environment.

The Division is also the nodal point for the following International Conventions such as:

i.  Basel Convention on Control of Transboundary Movement of Hazardous Waste and their Disposal.

ii.  Rotterdam Convention regarding the Prior Informed Consent Procedure for certain Chemicals and Pesticides in International Trade.

The Ministry has notified two set of rules for ensuring chemical safety in the country. They are as follows:

i.  The Manufacture, Storage and Import of Hazardous Chemicals (MSIHC) Rules, 1989.

•  These rules delineate the criteria for identification of Major Accident Hazard (MAH) unit.

•  An off-site emergency plan for a district having MAH unit (s) is required to be in place so as to mitigate the impact of chemical accidents.

•  A sub-scheme titled “Industrial Pocket wise Hazard Analysis” has been in operation since the Eighth Five Year Plan.

As per information provided by the Central Pollution Control Board (CPCB), there are about 41,523 industries in the country generating about 7.90 million tonnes of hazardous waste annually.

Out of all the waste generated annually, the categorisation is as follow:

The Ministry has also initiated a project on GIS-Based National Hazardous Waste Information System. It is a web-based system, which has been developed to provide the status of hazardous waste management in the country.

The Ministry notified e-waste (Management and Handling) Rules, 2011 which apply to e-waste generated from IT and telecommunication equipment and consumer electrical and electronics.

•  These rules empower the concerned state agencies to control, supervise and regulate relevant activities connected with e-waste management such as collection, segregation, dismantling and recycling.

•  The concept of Extended Producer Responsibility (EPR) has been enshrined in these rules.

•  Accordingly, producers are required to set up collection systems and meet the cost involved in the environmentally sound management of e-waste generated from the ‘end of life’ of their own products.

•  Besides, threshold limits, which are accepted globally, have been prescribed for six hazardous substances used in the manufacture of electrical and electronics components.

•  Producers are expected to achieve the reduction in the use of the hazardous substances (RoHS) to the prescribed limit within a period of two years from the date of commencement of these rules.

•  These rules are the main instrument to ensure environmentally sound management of e-waste.

•  The Indian coal has a high ash content of the order of 30-49 percent generating a large quantity of fly ash at coal based thermal power stations in the country.

•  Fly ash is a matter of concern as it requires a large area of land for its disposal because of its potential of causing pollution of air and water.

•  The main objective is to prevent dumping of fly ash from thermal power stations on land and to promote utilisation of ash in the manufacture of building materials and construction activity.

The objective of NRCP is to improve the water quality of rivers which are major water sources in the country, through the implementation of pollution abatement works in various towns along identified polluted stretches of rivers.

The pollution abatement works taken up under the NRCP include:

•  Riverfront development works, such as improvement of bathing ghats

Presently NRCP (excluding Ganga and its tributaries) has covered polluted stretches of 31 rivers in 75 towns spread over 14 states at a sanctioned cost of 4517.82 crores. 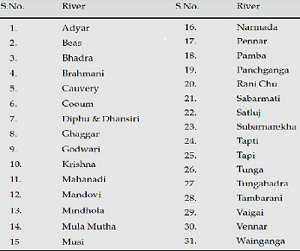 •  The Environment Ministry has emerged two separate centrally sponsored schemes for the conservation of lakes and wetlands into one integrated scheme of the National Plan for Conservation of Aquatic Ecosystems (NPCA).

•  The scheme aims at holistic conservation and restoration of lakes and wetlands for achieving the desired water quality enhancement.

•  The scheme would contribute to the reduction of pollution loads in lakes and wise use of wetland resources and their services.

•  NPCA is presently operational on cost sharing between Central and respective state governments.

So far under NLCP/NPCA, a total of 46 projects for conservation of 63 lakes have been sanctioned in 14 states for undertaking works like providing sewage system and sewage treatment plants, interception and diversion of sewage, desalting, catchment area treatment, storm water management.

Wetlands are a lifeline for a very large number of people and an important source of fresh water for mankind. Major problems of wetland include:

The National Wetland Conservation Programme (NWCP) was initiated in 1987 and financial assistance is being provided to the State governments for implementing action plans for the conservation and management of identified wetlands.

•  India became a signatory to the Ramsar Convention in 1982 as a commitment to conserving potential wetlands.

•  As per this convention, India is committed to international cooperation and to take national action for conservation and wise use of Wetlands.

•  At present, there are 26 Ramsar sites in India.

•  A regulatory mechanism was put in place through the Wetlands (Conservation and Management) Rules in December 2010.

•  The Ministry has initiated the process of revising the existing wetland rules to enable a greater role and ownership by state governments in the management of wetlands, particularly as water and land are state subjects.

•  The state wetland authorities are envisaged to be entrusted the role of management and regulation of wetlands within their jurisdiction.
World Wetland Day

•  Each year, World Wetland Day is celebrated on 2nd February for increasing awareness and spreading the need for conservation and wise use of wetlands all over the world.

•  The stakeholders of the wetland were invited to participate in the celebration. Prize distribution was held for the various competitions held on the eve of WWD on various environmental themes.

•  Wildlife Institute of India (WII) was established in 1986 as an autonomous institute of the Ministry.

•  The Institute is a premier research institution in the field of wildlife and protected area management in south and south East Asia.

•  Its mandates are to generate quality information and knowledge products in wildlife science through research and mainstream it in capacity building programmes.