The Central government has merged the Jammu & Kashmir Cadre IAS, IPS IFoS officers to AGMUT cadre through an ordinance. Let’s understand what is the AGMUT Cadre and why this merger was initiated. 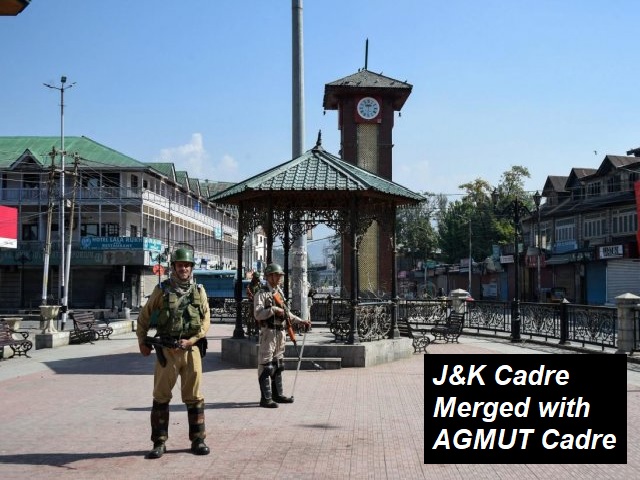 The Centre promulgated an ordinance on January 7 to merge the Jammu and Kashmir (J&K) cadre of All India Services Officers such as the IAS, IPS, and the Indian Forest Service (IFoS) with the Arunachal Pradesh, Goa, Mizoram, Union Territory (AGMUT) cadre. This ordinance implies that officers of the three services posted in the Arunachal Pradesh, Goa, Mizoram states and in the Union Territories of Delhi, Andaman and Nicobar Islands, Puducherry, Dadra Nagar Haveli, Daman and Diu, and Lakshadweep, Chandigarh can now be posted in J&K and Ladakh and vice versa.

What does the Ordinance to Merge J&K Cadre with AGMUT Cadre mean?

Since the winter session of Parliament was called off due to the COVID-19 threat, the ordinance signed by President Ram Nath Kovind amended the J&K Reorganisation Act, 2019 that bifurcated and downgraded the former State into two Union Territories of J&K and Ladakh.

The amendment to Section 88 of the principal Act reads, “The members of the Indian Administrative Service (IAS), Indian Police Service and Indian Forest Service for the existing cadre of J&K shall be borne and become part of the Arunachal Pradesh Goa Mizoram Union Territory cadre and all future allocations of All India Services officers for the Union Territory of J&K and the UT of Ladakh shall be made to AGMUT cadres for which necessary modifications may be made in corresponding cadre allocation rules by the Central government.”

The ordinance has also made an addition in Section 13, inserting the words “or any other article containing reference to elected members of the Legislative Assembly of the State” after “in Article 239A”. This implies that all the clauses and provisions mentioned under Article 239A will now be applicable to the Union Territory of Jammu and Kashmir.

What is the AGMUT Cadre?

AGMUT  is a joint cadre of three states namely Arunachal Pradesh, Goa, Mizoram, and all Union Territories. After qualifying the Civil services examination candidates are allocated a service, (IAS, IPS, IFS) based on rank and preference, where he/she has to give his preferences for cadre or region. The candidates are free to choose any cadre for the service after training and the decision of final allocation is decided by the Department of Personnel Training (DoPT).

The officers working in the State cadres work on the orders of the state government whereas in AGMUT cadre states and UTs the Central Government has direct control over its functioning.

Also Read: How are Cadres allotted to IAS/IPS/IFS Officers after Selection?

It is being observed that the batch of Kashmir Administrative Service (KAS) and Kashmir Police Service (KPS) officers will be impacted because they would have to be inducted into AGMUT cadre in absence of J&K Cadre. However, the government is viewing this as an opportunity to appoint a larger talent pool for the UTs.