Most important section in SSC CGL 2016!

The candidates would have to face English Language in both the tiers of the written examination. To the respite of candidates having fear with the language, there are no descriptive questions in the paper.

The Staff Selection Commission (SSC) has recently notified the Combine Graduate Level (CGL) examination for the year 2016. Lakhs of candidates applied for the examination every year. The candidates are getting accustomed of the new pattern for this year’s SSC CGL examination, where there would be no personal interview round. The personal interview round has been called off, in light of the official statement made by the Indian Prime Minister Narendra Modi last year. The candidates must ensure that they undergo the official notification well to understand the examination pattern.

The four papers collectively carry 200 marks for which the candidates would get a total of 2 hours’ time. The candidates, who would make it through to the tier I examination would then have to undergo Tier-II written examination.

**General Studies (Finance and Economics) and Statics paper examination would be taken in this tier for Assistant Audit Officerand Statistical Investigator and Compiler posts respectively.

Important: -The Tier -I written examination carries 50 marks in the quantitative aptitude paper and on Tier II, it is of 200 marks. It is one of the compulsory papers in the Tier II written examination, and thus the candidates need to have a strong preparation of the subject.

In Tier I examination, The difficulty level of questions in this section would be moderate to easy and would be from secondary and higher secondary level. The candidates can score real high by brushing up the basics of the subject by revision and practicing the sums once done in the junior classes. This paper would carry question related to

The Tier-II examination on the contrary would be a little tough than the tier I, containing mostly questions from same topics with greater difficulty levels. The candidates can score well in both the tiers of written examination through proper training in the paper and allow themselves to get through to the final selection.

- Fill the blanks with idioms and phrases,

Few Guidelines to attempt the section: 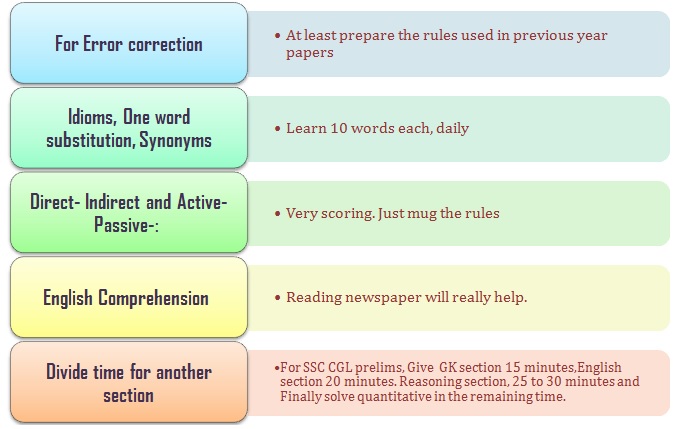 The new pattern of the SSC CGL examination focuses more on the written test as the personal interview round has been called off. The candidates would be test summarily in their written tests, making them more difficult than at present. Hence, the candidates must start working on the most scoring papers of the examination, which can make or break their chances of getting the job through SSC CGL 2016.