NCERT Solutions for Class 6 Social Science History Chapter 5 - Kingdoms, Kings and An Early Republic are available here for free PDF download. These NCERT Solutions contain the simplest answers that are easy to understand. These solutions are the best to clear all your doubts without anyone's assistance. We have provided here the solutions to all questions given at the end of chapter 5 of the latest NCERT Book for Class 6 History. You can easily download all the questions and answers from the link provided at the end of this article.

Check below the NCERT Solutions for Class 6 History Chapter 5 - Kingdoms, Kings and An Early Republic:

1. State whether true or false:

(a) Rajas who led the ashvamedha horse pass through their lands were invited to the sacrifice.

(b) The charioteer sprinkled sacred water on the king

(c) Archaeologists have found palaces in the settlements of the janapadas

(e) Many cities in mahajanapadas were fortified

(a) True; The Rajas who allowed the ashvamedha horse to pass, it meant that they accepted that the raja who wanted to perform the sacrifice was stronger than them. These rajas were then invited to the sacrifice.

(b) False; Priests performed the rituals including the sprinkling of sacred water on the king.

(c) False; Archaeologists found that people lived in huts, and kept cattle as well as other animals in the many settlements of the janapadas.

(d) True; Some of the earthen pots that would have been used to store grains were painted grey.

(e) True; Most mahajanapadas had a capital city, many of these were fortified. This means that huge walls of wood, brick or stone were built around them.

2. Fill in the chart given below with the terms: hunter-gatherers, farmers, traders, craftspersons, herders. 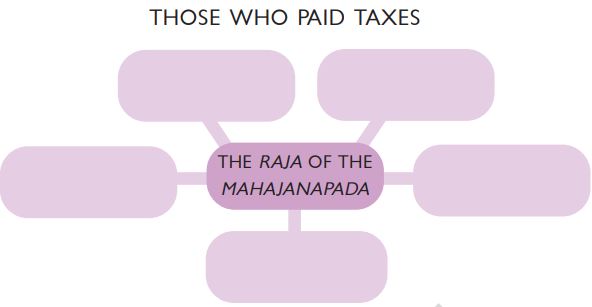 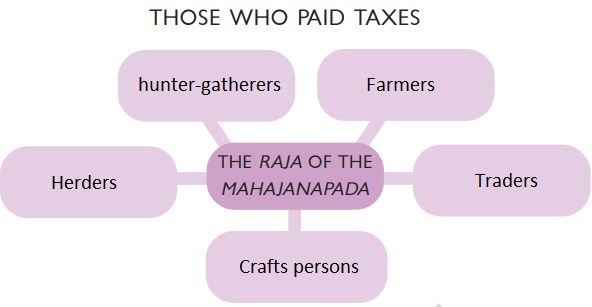 Hunter-gatherers: They had to provide forest produce such as elephants, furs and other items as a tribute to the raja.

Farmers: They gave one-sixth of the produce to the state.

Traders: There were taxes on goods that were bought and sold, through trade.

Herders: They paid taxes in the form of animals and animal produce.

3. Who were the groups who could not participate in the assemblies of the ganas?

The groups who could not participate in the assemblies of the ganas were:

4. Why did the rajas of mahajanapadas build forts?

The rajas of mahajanapadas built forts in order to protect their capital city and their people from attacks by other rajas. It is also likely that they wanted to show how rich and powerful they were by building large, powerful and impressive walls around their cities. Another prominent reason could be that it was easier to control the land and the people living inside the fortified cities.

5. In what ways are present-day elections different from the ways in which rulers were chosen in janapadas?

Present-day elections are conducted based on a democratic system in which all the citizens above 18 years have the right to vote for their favourite candidates. The candidate who wins the majority of votes becomes the public leader. On the other hand, in janapadas, there was no such system of voting. During this period, the men who performed the Ashvamedha sacrifice were chosen to be the kings.

Download all the NCERT Solutions for Class 6 History Chapter 5 from the following link: