IAS Naresh Kumar is a 1987-batch AGMUT cadre IAS officer who has been transferred from Arunachal Pradesh to Delhi. He would be the new Chief Secretary of New Delhi. Check his UPSC success journey below.

Recently in a major bureaucratic shuffle, IAS Naresh Kumar has been appointed as the Chief Secretary of Delhi. He has been posted here by the Ministry of Home Affairs and the notice has been released for the same. He is a 1987 batch IAS officer who was also associated with Delhi Transport Corporation.

As per the information available on the DoPT, Naresh Kumar belongs to the AGMUT cadre and was appointed in the year 1987 to Indian Administrative Services through UPSC Civil Services Exam.

Naresh Kumar has been transferred from Arunachal Pradesh, his last posting to New Delhi on the orders of the Union Ministry of Home Affairs. He was the Chief Secretary of Arunachal Pardesh before his transfer.

Naresh Kumar had earlier held the posts of chairman of the New Delhi Municipal Council (NDMC) and managing director of the Delhi Transport Corporation (DTC) in his previous stint in Delhi. 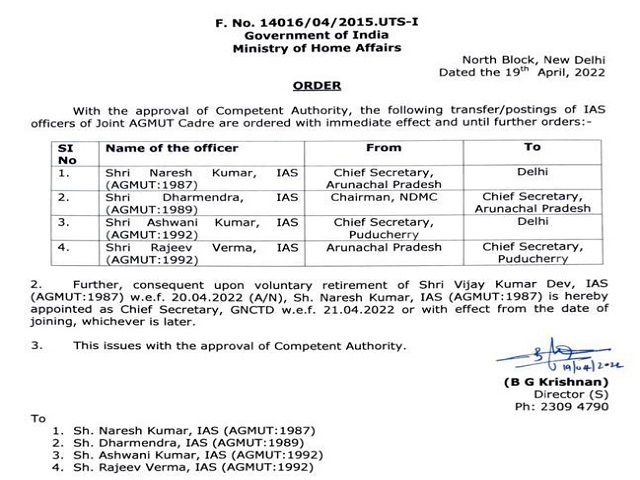 Let us know about the journey of IAS Naresh Kumar below.

Naresh Kumar was born on 18th November 1963. He belongs to Delhi. He got selected for the UPSC Civil Services exam at the tender age of 23. His joining was on 24th August 1987.

IAS Naresh Kumar is a Mechanical Engineer who graduated with first division. He completed his Master’s Degree in Business Administration and also completed a certification course from Duke University in Management.

UPSC IAS 2022: Which Are The Two Most Important Subjects For UPSC Prelims & Mains?

He was promoted to Deputy Commissioner within 2 years of his first posting.

From 1993 to 94 he served as the Additional Magistrate in District Administration, land revenue management in East Delhi. In 1994 he was appointed as the Joint Secretary (Under Secretary) in the Home department in the Ministry for one year.

He stayed in Delhi for a long time after that and served as the Administrator, Under Secretary from 1995-96, as Additional DM from 1996-97 and as Deputy Commissioner of South Delhi in 1997.

He then got promoted and transferred to M/o Hoem Affairs posted as Deputy Secretary from 1997-99 and also received foreign training from 1999-2000.

Naresh Kumar has also served as the Deputy Secretary at the Ministry of Home Affairs and as the Director there. From  2003 to 2005 he was appointed as the Chief Electoral Officer taking the charge of conducting elections and maintaining law and justice in the country then.

IAS Naresh Kumar has had a very impressive career graph and has been now appointed as the Chief Secretary of New Delhi.

The life journey of IAS Naresh Kumar is an inspiration for many candidates who are appearing for UPSC Civil Services Exam.