Top national events 2019: Get the full list of events that took place in India in 2019 such as the landmark Ayodhya verdict, passing of the triple talaq bill and the Balakot air strike by the Indian Air Force. 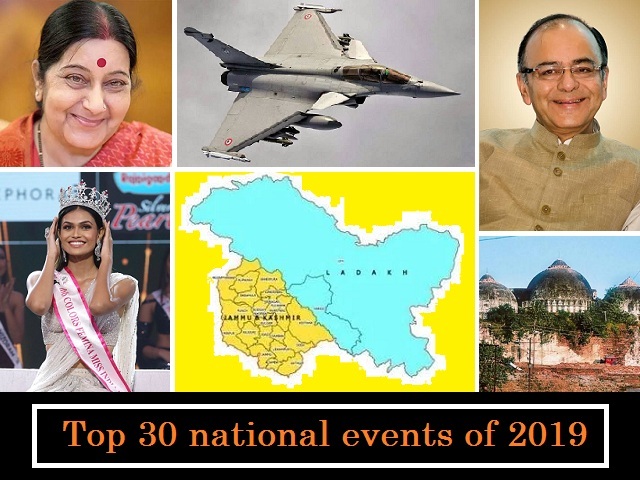 Top national events 2019: As curtains come down on the year 2019, Jagran Josh has compiled a list of top national events that took the nation by storm in the past year such the Ram Janmbhoomi-Babri Masjid verdict, bifurcation of J&K, new map of India, Arun Jaitley’s death, launch of Vande Bharat Express, Balakot air strike, Kalapani Territorial Dispute and the passing of the triple talaq bill among others.

SC upholds claim of Hindus to construct Ram temple at disputed Ayodhya site
In a historic verdict, the Supreme Court upheld the claim that Ram Janmbhoomi-Babri Masjid site is the birthplace of Ram and mandated that the whole of the disputed Ayodhya land should be given to the Hindus for the construction of a Ram Temple. The court directed the centre and state government to allot 5 acres of alternate land to the Sunni Waqf Board for the construction of the mosque. A trust has been mandated to be set up to oversee the construction of the Ram temple. Nirmohi Akhara has been allowed representation on the trust’s board.

SC refers Sabarimala review petitions to seven judge bench
The Sabarimala review petitions have been referred to a larger seven-judge bench by the Supreme Court. The SC bench, which gave the ruling was divided in its opinion, as two judges felt that when a judgment is declared, it is final and binds all. The petitions were filed against the Supreme Court’s landmark judgement of September 2018, when it allowed women of all ages to enter the Sabarimala temple in Kerala. The petitioners argue that the right top worship has to be exercised keeping in mind the nature of the deity.

What is Kalapani Territorial Dispute?
India’s new map has invited objections from Nepal, as it depicts Kalapani as a part of India. Nepal stated that the area falls under its territory. Kalapani is a disputed territory between India and Nepal. While India administers the region as a part of Pithoragarh in Uttarakhand, Nepal claims it to be a part of its Darchula district. Whose claim is valid? Check here for full details.

India gets first Rafale fighter jet: Everything you need to know!
India received first of the 36 Rafale fighter jets on October 18, 2019. Union Defence Minister Rajnath Singh flew to France to receive the jet. The Defence Minister performed a Shastra Puja, on the occasion of Vijayadashami, before receiving the Rafale jet. India had signed a deal worth Rs 59000 with France in September 2016 for the Rafale jets. The combat aircraft has been used during conflicts in Afghanistan, Libya, Mali, Iraq and Syria.

PM Modi honoured with 'Goalkeeper Award' by Bill and Melinda Gates Foundation
Indian Prime Minister Narendra Modi was honoured with the "Global Goalkeeper" award by Bill and Melinda Gates Foundation in September 2019 for his role in leading India in its wide-scale Swachh Bharat Abhiyan. The Swachh Bharat Abhiyan was launched in October 2014 to improve the condition of sanitation in India. The mission paved way for the construction of over 11 crore toilets across India. The mission has been most beneficial for the women in the country, especially the women in rural India.

Final Assam NRC list released: All you need to know
Assam’s final NRC list was released on August 31, 2019. The final NRC list included 3.11 Cr people and left out over 19 lakh people. Over 1,000 foreign tribunals have been set up for those whose names have been left out from the list. Assam has also begun construction its first detention centre. The centre is expected to have the capacity to detain about 3000 people. The Union Ministry of Home Affairs had clarified that the non-inclusion of a person’s name does not equate to the person being declared as a foreigner. The left out people will be given a chance to defend their case.

BJP stalwart Arun Jaitley passes away
In a massive loss for the nation, former Finance Minister Arun Jaitley passed away on August 24, 2019. The BJP stalwart was admitted in the ICU of AIIMS Delhi since August 9. The politician’s death shook political leaders across party lines, as he was the third senior BJP leader after Sushma Swaraj and Manohar Parrikar to pass away in 2019. Arun Jaitley was extremely valued as a political leader. He had held important portfolios during his time in the government including finance, law, corporate affairs and defence.

Article 370 and 35 (A) scrapped: How will it change Jammu & Kashmir?
Article 370 and Article 35 (A) was scrapped by the Union Government on August 5, 2019. With this, the special status of Jammu and Kashmir was withdrawn and it was decided to bifurcate the state into two Union Territories- J&K and Ladakh. The state will now cease to enjoy its previous special benefits such as having its separate constitution, flag and separate state status. With the removal of Article 35A, people from other states will be able to buy land in J&K and settle there.

Triple Talaq bill becomes a law
The Triple Talaq Bill became a law on July 31, 2019, after it received presidential assent. The Muslim Women (Protection of Rights on Marriage) Bill, 2019 was passed in the Rajya Sabha through a landmark vote with 99 in favour and 84 against. The bill aims to criminalise divorce among Muslims by simply stating talaq three times. It makes instant triple talaq punishable with a jail term of 3 years.

CCD owner VG Siddhartha found dead
CCD founder VG Siddhartha was found dead on July 31, after his body washed up ashore on Netravati River bank in Mangaluru. Siddhartha, son-in-law of former CM SM Krishna, had been missing since the night of July 29. His phone had been switched off and a letter was recovered, in which Siddhartha had apologized to his staff for failing to create a profitable business model.

Why was Shimla agreement in news?
Shimla Agreement was brought up in news after Donald Ttump claimed that PM Narendra Modi had asked him to mediate in the Kashmir Issue. India rejected the claim, as it violates the Agreement signed in 1972 between the then Indian PM Indira Gandhi and Pakistan President Zulfikar Ali Bhutto. The agreement contains a list of principles that emphasize on the respect for each other’s sovereignty, territorial integrity, sovereign equality and non-interference in each other’s internal affairs.

Three-time Delhi CM Sheila Dixit passes away
In a shocking development, former Delhi CM Sheila Dixit passed away on July 20, 2019 due to cardiac arrest. Sheila Dikshit was Delhi’s longest-serving chief minister, having served the state for 15 years in three consecutive terms from 1998 till 2013. She was President of the Delhi Congress at the time of her death. She was credited with bringing about major changes in Delhi.

Former External Affairs Minister Sushma Swaraj passes away
The dynamic BJP leader, Sushma Swaraj passed away on August 6, 2019 due to cardiac arrest. The leader’s passing saddened many, as it was sudden and unexpected. Only few months ago, Swaraj had opted out of Modi 2.0 citing health reasons. The four-term MP had left a lasting impact as the Union External Affairs Minister in the first term of the Narendra Modi government.