Brain Teaser Picture Puzzle: Can you spot all 6 words hidden inside Playroom in 9 secs?

Brain Teaser Puzzle: In this fun quiz, try to spot all 6 secret words hidden inside the Playroom picture. Only a genius can spot all 6 words within 9 seconds!

Brain Teaser Picture Puzzle: This brain teaser is for those who enjoy playing word games and solving riddles. Brain games make a simple word puzzle more interesting, as these fun games are solved with creative thinking. While solving these word games, you need to scan and analyze the problem a little differently than usual. You need to use a little different approach for coming on to the solution as the answer won’t be right in front of you. So, we have come up with an interesting brain teaser where you have to identify all the 6 secret words hidden inside the Playroom picture.

Can you spot all 6 words hidden in Playroom Picture within 9 seconds? 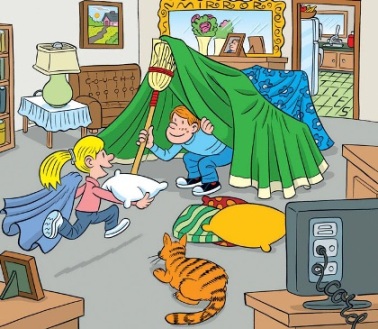 In the above image, you need to spot all the six words hidden inside the playroom where the girl is bringing a pillow and his father is making a tent. The cat is sitting along with them in the playroom. You are required to look at the image carefully before answering the question as the answer is quite simple but tricky. As a heads up, the answers to this brain teaser have been given right below the question, so make sure you don’t scroll too far and cheat!

Can you spot who is the most stupid person in picture?

Hint: All the words are hidden in the background of the image.

In this picture puzzle, you need to identify all 6 secret words hidden in the picture where the girl and his father are playing and enjoying with their cat in the room. The father is trying to build the tent inside the playroom with the help of a broom. The girl is excited to play and bring the pillow inside the tent. 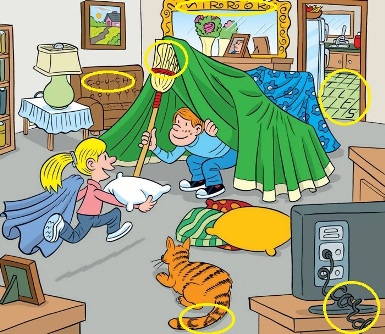 Can you spot a Bat, a Duck, a Butterfly in old Family Picture?

At first, you probably won't notice all the words immediately. But after a few seconds, you might be able to identify the words hidden inside the image. This brain teaser is proving to be a challenge even for people with an eagle-eyed view. So it has been claimed that you could be a genius if you can spot all 6 words hidden in pictures within 9 seconds.

So, the six words that are hidden inside the water park image are - Mirror, Straw, Cord, Cat, Couch, and Tiles.

Word puzzles are a simple test of your observation and vocabulary skills. They don’t necessarily require lateral thinking. This word game was a tricky one but a simple one as it needs less time and brain power to solve. However, you’ll definitely feel satisfied if you have figured out the answer in a few seconds.