Brain Teaser for Testing Your IQ: Can you spot who is the most stupid person in picture within 11 secs?

Brain Teaser for Testing Your IQ: This brain teaser will help in testing your intelligence level based on the decision you make while looking at the problem. This IQ test is also a fun way to know your Intelligence Quotient. Brain puzzles make a simple riddle more interesting, as these fun games are solved with creative thinking. While solving these brain teasers, you need to scan the problem and arrive at the answer by using analytical reasoning skills. You need to use a little different approach for coming on to the solution as the answer won’t be right in front of you. So, we have come up with an interesting brain teaser where you have to identify the most stupid person among the four people sitting on a tree branch in the image.

Brain Teaser IQ Test: Can you spot who is the most stupid person in 11 seconds? 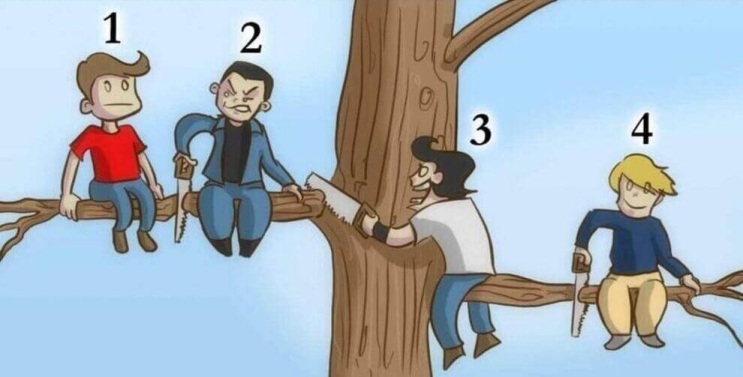 In the above image, you need to decide who is the most stupid among the four persons based on their actions and situation. You are required to look at the image carefully before answering the question as the answer is quite simple but tricky. As a heads up, the answers to this brain teaser have been given right below the question, so make sure you don’t scroll too far and cheat!

If you look at the action of the four persons in the picture, all of them are part of being stupid. However, there is an Order of stupidity. So, let’s see who is the most stupid person and the least stupid amongst all in decreasing order (most stupid to least): 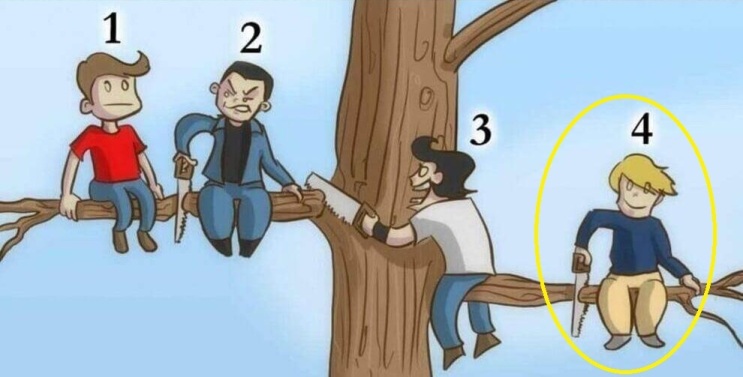 Most Stupid Person - Person No. 4 who is cutting his own branch where he is sitting is the most stupid amongst the four persons.

2nd Most Stupid Person - Person No. 1 is the 2nd most stupid person as he is sitting on the trunk that is to be cut down by Person No. 2.

3rd Most Stupid Person - Person No. 2 has not realized that he will also be going down as Person No.3 is cutting his branch.

Person No.3 is the sliest and most clever person in the group.

So, the answer to this mental quiz is that Person No. 4 is the most stupid person among the four people sitting on the branches of a tree.

The above brain teaser is a simple test of your intelligence and observation skills. It requires lateral thinking to solve the puzzle within the stipulated time. However, you’ll definitely feel satisfied if you have figured out the answer in few seconds.  This brain teaser is just another fun way to test your IQ. However, taking an actual IQ test is a good way of knowing your IQ level.