Till date there are 20 moon missions have been launched successfully on the dark side of the moon by the 3 countries. Indian could have been the 4th country if Chandrayaan-2 did not fail partially. The first successful moon was Luna 2 which was launched by the Union of Soviet Socialist Republics (USSR) on 12 September 1959. While the first successful manned mission (Apollo 11) was launched by the USA on 16 July 1969. Read this article to know the full details of all the successful moon missions. 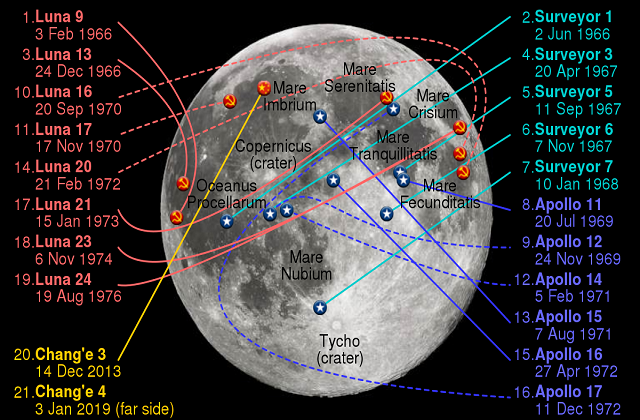 As the science is progressing the number of space missions are also increasing. Due to some technical reasons India could not get success in its Chandrayaan-2 moon mission. But this is not the end of Indian space missions. India has miles to go.

There are numerous space missions have been undertaken to study the surface and climate of the moon. The very first successful trial (Luna 2) in this direction was made by the USSR.

Till date there are 6 manned missions have been conducted successfully by the USA alone. The first manned mission on the moon was Apollo- 11 launched on 16 July 1969.

Now see the list of all the Moon Missions

The above list of moon mission shows that all the manned moon missions are conducted by the USA and no other country could achieve this feat so far. It is very surprising that Russia started the space race but it could not manage to send a single manned mission so far.

In total there are just three countries manage to land spacecraft on the land of the moon.  We hope that very soon India will be the fourth country that will resister its presence on the moon.

Chandrayaan-2, ISRO re-establishing communication link with Vikram Lander: All you need to know