Optical Illusion: We Bet you Cannot Find the Hidden Cat in 11 Seconds

Hidden Cat Optical Illusion: Optical illusions are mind-bending images that help assess the levels of perception of the human brain. There are various kinds of optical illusions which are cognitive, psychological and physical.

Moreover, these are also great resources for scientists to study the way our brains interact with optical illusion images.

Ready to dive into the magic world of optical illusions?

Optical Illusion: You Are a Genius if You Can Spot the Hidden Bee in 11 Seconds

Take a look at the image below

This image was captured by ViralHog on a rooftop in Rio de Janeiro. We can see that a dog is resting its head on the roof of a house.

It appears as if the dog is lifeless.

But, we are asking you to spot the hidden cat in this image.

You have 11 seconds to spot the hidden cat.

Are you able to spot the hidden cat?

Try a little harder and you will be able to find the cat.

Any success so far?

We understand that it is a tough challenge and someone with superior observation skills can solve the illusion within time.

Well, folks, the clock has signalled the end of time.

How many of you were able to find the hidden cat?

We believe some of you have already spotted the cat and some are still in search of it.

Look no further, scroll below for the solution. 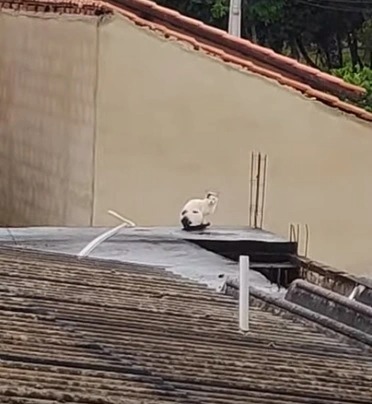 The cat was hiding in front of you all this time and you weren’t able to find it because of the colour of its coat.

The placement of black furs in the cat’s body is such that it appears as if a dog is staring at you from the roof.

The dog that we spoke of earlier in the article is a black and white cat that had its back turned towards the camera.

Optical Illusion: You Are A Champion If You Can Spot the Hidden Leopard In 13 Seconds

Can you Find the Hidden Snake in the Bushes in this Optical Illusion within 11 Seconds?

Find Henry the Hedgehog in this Optical Illusion in 7 Seconds. Can you?