Why is only Pink Ball chosen for the day night Test match?

Science is used in almost every sport around the world. In cricket, the dress of players is also made based on scientific reasons. In ODI cricket, players wear colored clothes and play with a white ball. The reason behind this combination is that the ball should be visible clearly to the players.

Use of the ball in Test Cricket;

There are 3 types of balls used in Test matches. Their names are; Kookaburra, SG, and Duke. Balls of different colors are used in different formats in cricket. Difference in Red and Pink Ball

The main difference between the pink and red ball is the way leather is processed. The red ball has dyed leather and some other processes are also done to shine it. On the other hand; the pink colour is because of a pigment with which the leather is coated.

What are different types of Balls used in Cricket?

In the case of the traditional red ball, the red colour is absorbed by the leather, while the pink ball is painted just like a car is painted. The pink ball has an extra layer of colour, so it will swing a lot as long as the ball is new.

Why Pink ball in day night test match not Orange or Yellow?

The first pink ball was manufactured by Australia's ball manufacturing company ‘Kookabura’. Initially, the colour of this ball used to come off quickly but the company worked on it and now it became more permanent just like a red ball. 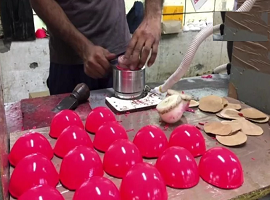 Initially, the Kookabura company used orange and yellow colours in manufacturing the ball. During its experiments; the cameramen were not able to see the yellow and orange ball properly and they were having difficulty in covering the match.

That is the reason that the Kookabura company; decided to change the colour of the ball and after the successful experiments, it was changed to pink.

I hope, after reading the above explanation you must understand why pink colour is painted on the ball? Now it can be expected that the use of a pink ball in the day-night test matches will increase the popularity of the test matches.

List of devices used by the Umpires in the Cricket?