What is GST? Guide for Young Working Professionals

With GST set to be implemented from mid-night, here’s the new Goods and Services Tax would entail for young working professionals across the country.

GST or the Goods and Services Tax will be implemented from mid-night tonight and it has almost everyone including professional CAs working round the clock to decode the phenomenon. Touted as the biggest tax reform in Indian Economy, the GST would certainly have a major impact upon youth of the country i.e. working professionals and millennials. While there are many ways in which one can find out GST rates or evaluate the impact of GST rate list on businesses, not many are talking about the impact it would have on the biggest demographic of the country i.e. young working professionals. If you have also been baffling with this very question, here are some insights that might help you out!

Why would GST impact Young Working Professionals the most?

India is a developing economy with the highest population of youth under 30 years of age. And when we talk about this chunk of population, it is of considerable importance as the economy relies on their productive capabilities. With the biggest tax reform of Indian that is predicted to affect the personal disposable income of the salaried employees, let us take a look at the various ways in which GST will impact the lives of people alike.

As per the recent mandate being issued by CBEC, Goods and Service Tax (GST) is said to be implemented from July 01, 2017 which will mark an end to all other indirect taxes such as service tax, VAT and many more. But before we analyse the impact of the GST reform on the life of salaried employees, let us first understand how this tax will be implemented on various goods and services.

The tax reform has been simplified in a way that it will be implemented at three levels. It will take the form of “dual GST” which will be levied by both the central and state government. The proposed structure of GST is as under:

There is much ado about the removal of taxes and single tax taking over others. Still we do not know which taxes are being curtailed at which level. The taxes enlisted below will help you understand the taxes which you are paying at present and will be free from since 1st July 2017 onwards. Also, it is important to understand if the bearing of paying multiple taxes is burning a hole on your pocket or paying a single tax is a cause of concern.

Taxes which are subsumed under GST are as follows:

The taxes enlisted above are the ones which you pay before buying a product or service. So, even if you are buying something from the market, it is not tax free. GST is making the processes simplified by imposing a single tax system in the market so that people do not end up paying taxes at every stage and level.

GST Tax Rates: What is Expensive and what is Cheaper under GST?

For salaried employees and others as well, the majority chunk of their personal disposable income is spent on the items listed below. For them, it is important to manage their monthly budget as the expenses are never ending but the income remains limited.

Even if GST is getting implemented in the mid-year term, the salaried would remain the same irrespective of the positive or negative changes in the prices of the goods and services that are rendered on regular basis.

List of a few items which are often being consumed by common man and the impact on the price change is mentioned below. Take a look at the items and plan your monthly budget accordingly.

Salaried employees might have to face a burnt out of the tax reforms at the initial stages. All their money management skills will be put to test to accommodate with the GST reform. For an instance if you hold a post-paid connection then service tax rates which is at present decided by the state will no longer remain the same. Your phone bill might see escalation of taxes after GST implementation. As per the GST a single tax of 18 per cent shun the current tax of 15 per cent leading to more money shelling out from your pocket. You will end up paying Rs. 1180/- as against Rs. 1150/- for a phone bill of Rs. 1000/-.

On the contrary, it also favours this class as from now onwards, there will be no other liability such as entertainment tax, luxury tax, service tax, VAT, etc. 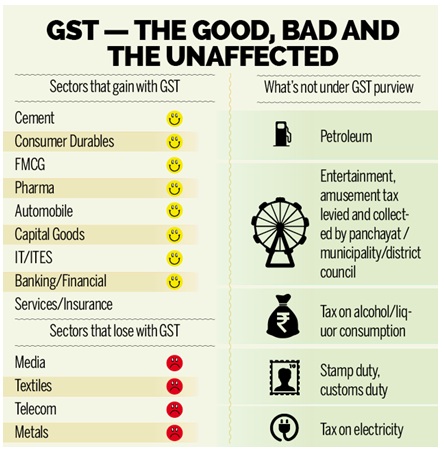 In a nutshell, if we see the list of the items above and many more in the PDF, it is evident that GST one hand has increased expenses on items such as restaurants, movies, shopping, consulting, construction, etc. will increase but on the other hand expenses on household items will decrease.

So managing the household front will become pretty manageable. But the aspirations of the ‘Urban Poor’ class will see a dip in the coming days where they will again think twice before splurging money on entertainment and luxury.

While the salaried employees might be worried about the implications of GST on their spending, here there is good news as well. The GST will cause a trouble for some at the initial stages until we again learn to manage our expenses but on the contrary the overall impact of GST will be positive on the growth of the economy.

The trickledown effect will be evident on various aspects of economic growth. Some of the areas which will receive the direct benefits are:

It can be said that the overall impact of GST will witness utilitarian benefits for the masses of India and will also enhance the income-expense ratio in the long-run.

Subscribe with us to receive the latest updates about the current happenings in the economy that have a potential to impact your Career.