Which post is the best through SSC CGL for female candidates?

Staff Selection Commission Combined Graduate Level Examination is one of the biggest recruitment drives carried out by the central government almost every year. Read about the preference order that can be ideal for female candidates.

Staff Selection Commission Combined Graduate Level Examination is one of the biggest recruitment drives carried out by the central government almost every year. The examination is divided into basically two tiers with the first tier being based on English, Mathematics, General Awareness and Reasoning and the Tier II being based on only Mathematics and English. From 2016 onwards (as proposed), there will be no interview for the SSC posts since interviews have been done away with for Group B and C jobs for which recruitment is done through SSC. Coming to posts for which recruitments are done, all the posts are open for both males and females, but taking into consideration the job nature of different posts; we shall look into the preference of posts for which female candidates should go for. However, the discussion is purely based on convenience of women rather than the eligibility of women for the posts.

The list below is made according to the preference order that can be ideal for female candidates. 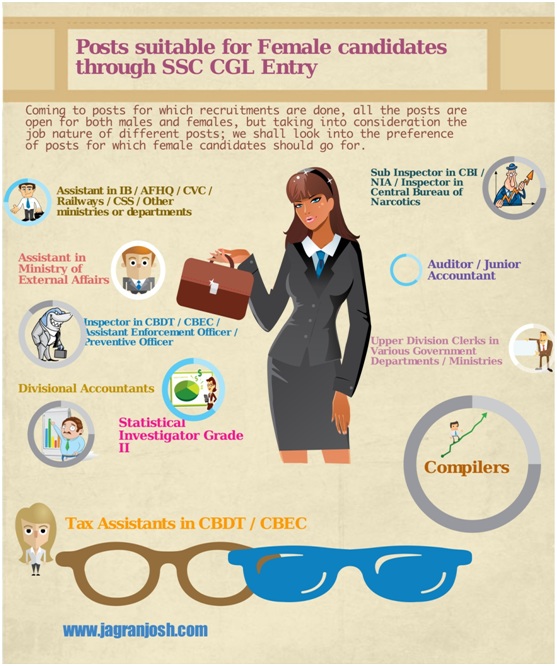 The posts are classified according to the job profiles as well as salary and status (Group B or C) and the candidates can go through the profiles and select accordingly. The ones clubbed together are almost similar in nature in terms of salary, perks, job profile etc. and hence, candidates can choose according to personal views among them. Again, the last word of caution is, candidates should understand their own goals and give preferences accordingly since there is no provision of changing the preferences at a later stage in case of SSC CGL.