A tribute to Pulwama Hero: Nikita Kaul, the wife of Pulwama Martyr Major Vibhuti Dhoundiyal, followed the footsteps of her husband as she donned the Indian Army uniform. On 26 May 2021, she passed out of the Officers Training Academy. 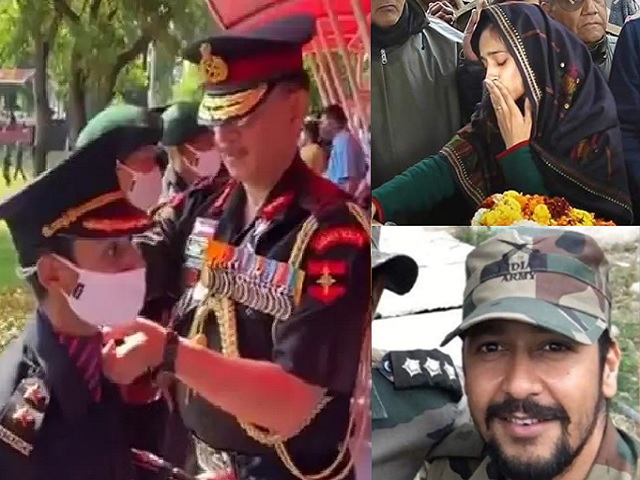 A tribute to Pulwama Hero: Nikita Kaul, the wife of Pulwama Martyr Major Vibhuti Dhoundiyal, followed the footsteps of her husband as she donned the Indian Army uniform. Commander of the Army's Northern Command Lt. Gen Y.K. Joshi piped stars on her shoulders at a ceremony held at the Officers Training Academy in Chennai, Tamil Nadu. With this, Nikita Kaul is now Lt. Nikita Kaul.

Nikita Kaul's decision to join the Indian Army has garnered wide praise. While some are calling it a 'befitting tribute to her late husband' others are terming it as a 'truly inspirational story'.

#MajVibhutiShankarDhoundiyal, made the Supreme Sacrifice at #Pulwama in 2019, was awarded SC (P). Today his wife @Nitikakaul dons #IndianArmy uniform; paying him a befitting tribute. A proud moment for her as Lt Gen Y K Joshi, #ArmyCdrNC himself pips the Stars on her shoulders! pic.twitter.com/ovoRDyybTs

After joining the Indian Army, Nikita Kaul said that it is her way of paying tribute to her husband Major Vibhuti Shankar Dhoundiyal. In an emotional statement, Nikita said, "I've experienced the same journey he has been through. I believe he's always going to be part of my life."

#WATCH | ....I've experienced same journey he has been through. I believe he's always going to be part of my life: Nitika Kaul, wife of Maj Vibhuti Shankar Dhoundiyal who lost his life in 2019 Pulwama attack, at passing out parade at Officers Training Academy in Chennai pic.twitter.com/7cLRlsp39c

"I took my own time to recover from the major loss and the decision to sit for the Short Service Commission examination happened gradually. Just filling the form in September last year was a big decision. But I had decided that I want to walk on a similar path like my husband," Nita Kaul while explaining her decision to join the Indian Army.

She further added, "I went back to work around 15 days after my husband’s death because I wanted to keep myself busy. It is natural to have a breakdown but we needed to accept the situation. I had to find positivity in my daily routine and stand up on my feet once again."

Vowed to Join the Indian Army

Major Vibhuti Dhoundiyal who was martyred in the 2019 Pulwama Attack was awarded Shaurya Chakra posthumously in 2019 for his supreme sacrifice to the nation. Soon after this, his wife, Nikita Kaul, vowed to join the Indian Army.

While bidding farewell to her husband Major Vibhuti Shankar Dhoundiyal, she said, "You said you loved me, but the fact is you loved the nation more. I am really proud. We all love you. The way you love everyone is entirely different because you sacrificed your life for the people who you may have never met, but still you decided to give your life for them. You are such a brave man. I am very honoured to have you as my husband. I'll love you till my last breath. I owe my life to you."