Optical Illusion: Can you figure out which way the stairs are going?

The famous illusion has seven stairs, and people belonging from different gravity sources can use each of them.

Optical Illusion: Artists often use the power of optical illusions to challenge the human mind. Their artistic creativity makes us look at the image twice. Today's optical illusion is about one such image that will urge you to question reality.

Take a look at the image below. Can you figure out which way the stairs are going? 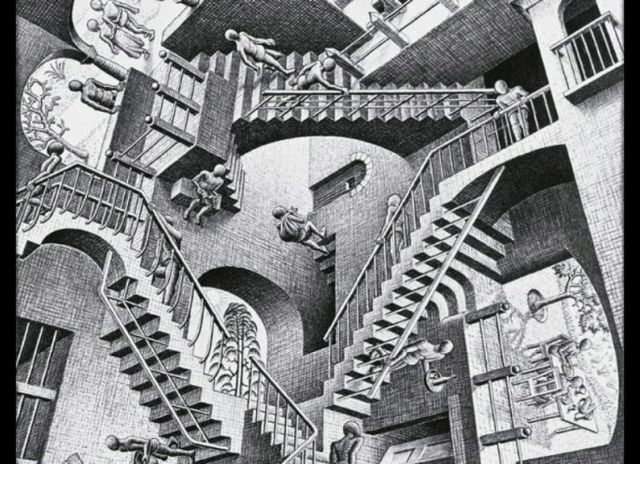 The above image depicts a world where the laws of gravity don't apply. Created by Dutch graphic artist MC Escher, the lithograph print shows the inhabitants of a community carrying out their casual businesses.

READ | Optical Illusion: Can you find the hidden animal in less than two minutes?

The illusion titled Relativity has three sources of gravity, each orthogonal to the two others. Each inhabitant lives in one of the gravity wells where the physical laws apply.

The image depicts sixteen people spread between each gravity source-- six in one and ten in the other two. The illusion arises as three gravity sources are depicted in the same space.

READ | Optical illusion: What do you see first - a man's face or someone reading a book? Here's your most annoying personality trait

The famous illusion has seven stairs, and people belonging from different gravity sources can use each of them.

If you look at the topmost stairway, two people are using it-- one is climbing while the other is descending. In the stairway at the right, inhabitants look like descending upside-down, but they are doing it normally based on their gravity source. The same goes for the other stairways.

You might be interested in taking a look at the below-mentioned optical illusions:   Optical Illusion: This remarkable piece of art reveals a lot about you!
A cat and a moose are concealed in the viral optical illusion. What animal do you see?

Optical Illusion: Check your strengths and weaknesses based on what you see first