Optical Illusion: Can you spot the hidden marshmallow among the seals in 10 seconds?

Optical Illusion: There is a marshmallow hiding in plain sight in this picture. You are a genius if you can spot the marshmallow in 10 seconds. Test your observation skills by attempting this optical illusion challenge now!
Mrigank Chakraborty Updated: Nov 25, 2022 14:10 IST
Find Marshmallow in 10 Seconds

Optical Illusion Test: Optical illusions are mind-bending images that challenge your perception and test your observation skills. There are three types of optical illusions literal, physiological, and cognitive.

Despite the wide range in attention spans among today's population, optical illusions have been able to not only get people's attention but also keep them interested and returning for more.

Netizens love taking on new optical illusion challenges that become a fun way to entertain themselves and also prove their intelligence to friends and peers.

According to studies, optical illusions help boost concentration and enhance your observational skills.

Want to improve your observational skills? 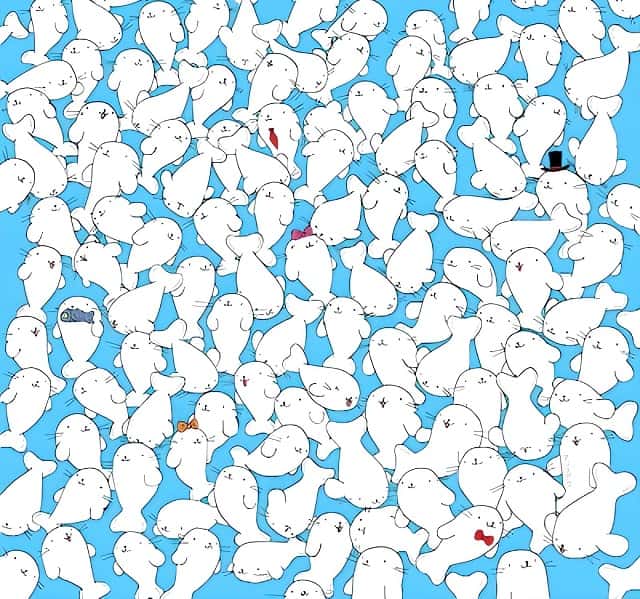 The image shared above is a creation of the Hungarian artist Gergely Dudás, also known as Dudolf.

In this image, we can see a group of seals happily playing around. The challenge for you is to find a hidden marshmallow among the seals within 10 seconds.

If you really need to understand your actual IQ levels, then professionally designed IQ tests are the best way to find out your IQ.

Spot The Difference: Can you spot 7 differences in 31 seconds?

Did You Find the Marshmallow in 10 Seconds?

Looking carefully at the picture, you can see groups of seals playing around. Some female seals have used a head accessory to stand out from the crowd, while some male seals are wearing ties or hats to look cool.

The challenge for you is to find a marshmallow in this picture within 10 seconds.

Android is the most popular smartphone OS in the world. Google has released one version of Android codenamed "Marshmallow,” which is the 6th version of the popular Android OS.

Did you find the marshmallow in the picture?

Hurry up; time is running out.

You have a few seconds left to complete the challenge.

How many of you have been able to spot the marshmallow?

Let’s look at the solution.

Before we move on to the solution, we would like to congratulate the users who have spotted the marshmallow within the time limit.

Those who weren’t able to and are looking for the solution can scroll below.

Spot the Marshmallow in 10 Seconds - Solution

The marshmallow is between two seals, on the bottom left part of the image, just away from the centre. The colour of the marshmallow and the seals being the same makes it difficult to spot at first glance.