WBTET 2014 Merit List Features Political Leaders Name: WBBPE released the WBTET merit list 2022 with several irregularities. Know about the stand of the board, government, and attacks launched by the opposition here!

WBTET merit list released by WBBPE faces serious criticism after its release: The West Bengal Board of Primary Education (WBBPE) Board lands in yet another soup with the declaration of the WBTET 2014 merit list. Citing the directives released by the High Court, the board released the merit list for the West Bengal TET 2014 exam. However, minutes after it was released, the board was grilled by students and the minister of opposition. The reason for this was the merit list consisting of the name of the students resembling political leaders.

What Does WBBPE Say?

Soon after the attacks were launched, WBBPE president Goutam Paul conducted a press conference to clear the air related to this chaos. The president shared that these names are just a matter of coincidence. Speaking at the conference, he shared, “I am sharing the list of such names with their details. You can see it for yourself. I am clearly saying that these are genuine candidates. If you have any doubts then you can give them a call and verify yourself. Even three of my namesakes are on this list”.

West Bengal Board of Primary Education (WBBPE) Board has also issued official notice regarding this: 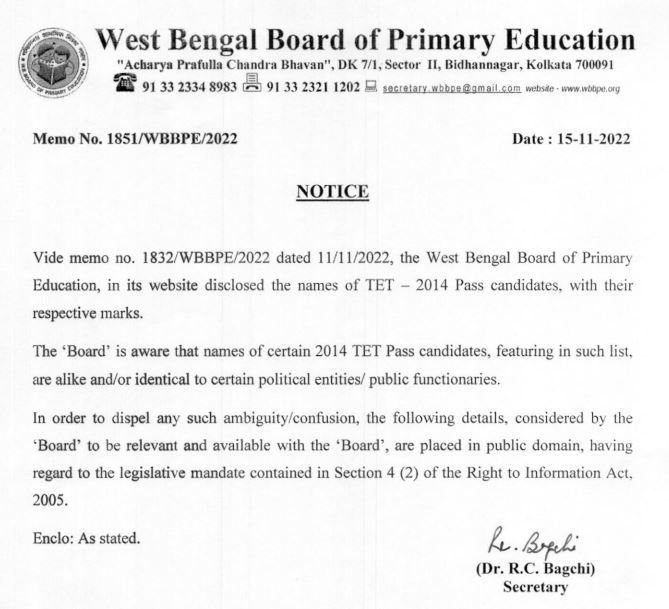 Apart from this, a group of lawyers raised concerns over the appearance of the names in the WBTET 2014 merit list. The lawyers tagged Justice Abhijit Gangopadhyay, Calcutta High Court, and urged him to look into this matter seriously. They have asked the honorable court to cross-check if this is a mere coincidence or another irregularity.

At present, the Calcutta HC has been conducting hearings regarding the alleged WBTET 2014 scam. The petition has been filed against various eminent personalities like Partha Chatterjee. The court has recently rejected the bail petition of the seven accused stating that the investigation is underway and more.