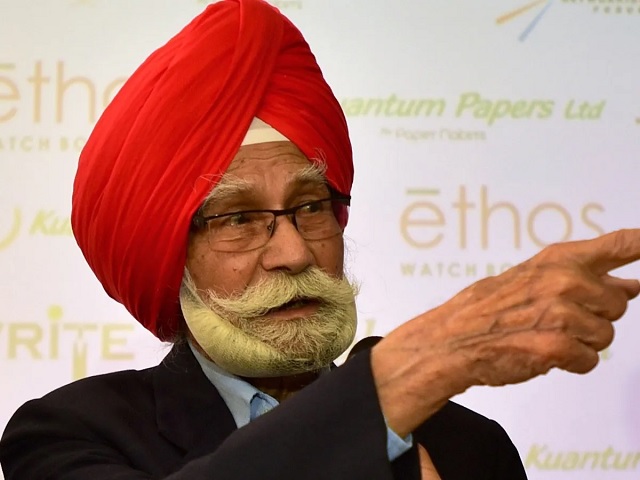 Balbir Singh Dosanjh (Balbir Singh Sr.) was an Indian Hockey player who won Olympic gold medal three times-- London (1948), Helsinki (1952) and Melbourne (1956). Balbir Singh was a legendary Hockey player and was regarded as the modern-day Dhyan Chand. He scored five goals in India's 6-1 victory in 1952 Olympics in India vs Netherlands match. He still holds his record of scoring most goals by an individual in an Olympic men's Hockey.

Balbir Singh died on May 25, 2020, at the age of 95 years due to multiple health issues. Balbir Singh Sr. took his last breath at Fortis Hospital, Punjab.

Harbail Singh who was a Hockey coach in Khalsa College, Amritsar, insisted Balbir Singh's transfer to his college from Sikh National College, Lahore, Pakistan. In 1942, after Balbir Singh sought permission from his parents, got transferred to Khalsa College where he began intensive practice sessions under the guidance of coach Harbail Singh. Harbail Singh also coached Indian National Hockey Team at Helsinki and Melbourne Olympics.

In 1948, Balbir Singh made his debut in Olympics. He played at London Olympics against Argentina (India's second match). Balbir Singh also played the final match against Great Britain and scored the first two goals for India. India won by 4-0.

Balbir Singh also scored five goals against the Netherlands and set an Olympic record for the most goals scored by an individual in men's field Hockey in Olympic final. India won by 6-1.

It is interesting to note that Balbir Singh scored 13 goals i.e., 69.23% of the team's goals at Helsinki Olympics.

Balbir Singh was the captain of the 1956 Melbourne Olympics team. He got injured after scoring five goals in the opening match against Afghanistan. However, Balbir Singh played the semi-final and the final match despite being injured. India won the finals against Pakistan with 1-0.

1- In 1957, Balbir Singh Dosanjh was awarded Padma Shri by the Government of India. He was the first recipient of the award in the sports category.

2- Balbir Singh Dosanjh was the member of the Indian Hockey team that won silver at 1958 Asian Games.

4- In 1975, Balbir Singh Dosanjh was the manager of the Indian Hockey team that won the World Cup Hockey.

5- Balbir Singh Dosanjh is the authored two books-- The Golden Hat Trick (1977), which was his autobiography and The Golden Yardstick: In Quest of Hockey Excellence (2008).

1- Balbir Singh Sr. was the first recipient of the Padma Shri award in the sports category in 1957.

2- Balbir Singh Sr. along with Gurdev Singh was featured on a stamp to commemorate the 1956 Melbourne Olympics. The stamp was issued by the Dominican Republic in 1958.

3- In 2006, Balbir Singh Sr. was awarded the 'Best Sikh Hockey Player'. At that time, Balbir Singh Sr. stated that being a secular nationalist, he is not convinced with the religious-based award, but accepted it as he believed that it will help promote the Indian Hockey.

4- In 1982, a poll was conducted by the Patriot newspaper where he was awarded as the 'Indian Sportsperson of the Century'.