North East’s first-ever specialised 'Ginger' Processing Plant in Meghalaya has been revived: All you need to know

North East’s first-ever specialised Ginger Processing Plant at Ri-Bhoui district in Meghalaya has been revived and is likely to become functional this year i.e., 2021. 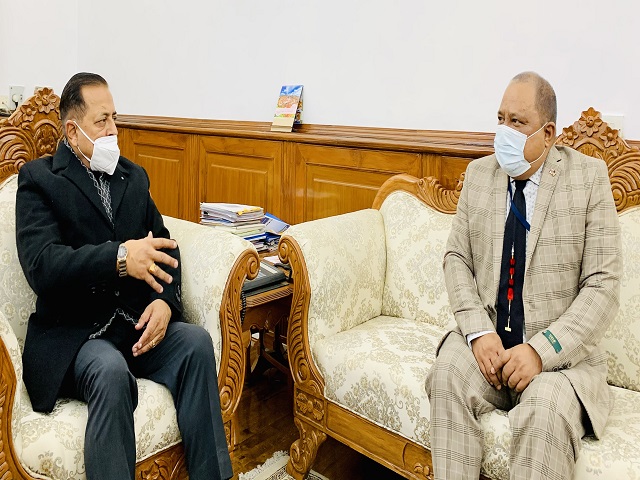 North East’s first-ever specialised "Ginger" Processing Plant at Ri-Bhoui district in Meghalaya has been revived and is likely to become functional this year i.e., 2021.

The Ginger Processing Plant of North East India was established around the year 2004 but remained non-functional for many years. The North Eastern Regional Agricultural Marketing Corporation (NERAMAC) has now undertaken the responsibility of reviving it and initiated steps to operationalize the closed Plant through Public-Private Partnership (PPP) mode.

2- It will not only process ginger but will also help in the preparation of the products such as waxed ginger, ginger paste, ginger powder, ginger flakes, ginger oil, and so forth.

3- 'Ginger' has attained a place of prominence amid the ongoing COVID-19 pandemic as it acts as an immunity booster.  Prime Minister Modi also referred to 'Ginger' recently for boosting the immunity.

4- The Ginger products prepared from the Ginger Processing Plant will not only be available for domestic consumption but will have a wider demand and will be in line with Prime Minister Modi's vision of Atma Nirbhar Bharat.

5- Under PPP mode, an Operation and Maintenance Operator was selected through the tender process and the work is currently under progress.

As stated by Managing Director of North Eastern Regional Agricultural Marketing Corporation (NERAMAC), Manoj Kummar Das, the plant at Meghalaya will give the much-needed facility to the ginger growers and they will be able to use their capacities and at the same time optimally utilize the natural resources.

Additionally, 100 new fresh retail points will be set up in North East and Fruit Kiosks at Guwahati and other major towns of the North East region of India. Most of these will be through a Public-Private Partnership (PPP) mode. NERAMAC will develop marketing complexes with state-of-the-art facilities.

About North East Region of India

North East Region of India comprises of Eight States-- Arunachal Pradesh, Assam, Manipur, Meghalaya, Mizoram, Nagaland, Sikkim and Tripura. The region shares an International border of 5,182 kilometres which is around 99% of its total geographical boundary.

What are Desalination plants?

Which states are located in the North East region of India?

What is the Public-Private Partnership (PPP)?

Public-Private Partnership (PPP) is a funding model for public infrastructure projects (airport, powerplant, etc.) where the public partner is represented by the Central, State and/or Local Government while the private partner can be a privately-owned business, a consortium of business etc. with a specific area of expertise.