No Weightage to Class 12th Board Marks, CUET 2022 Mandatory for UG Admission at Central Universities: UGC

NTA will conduct CUET to admit students to undergraduate programmes. It is expected that the test pattern and CUET notification will release anytime soon now. Get details here 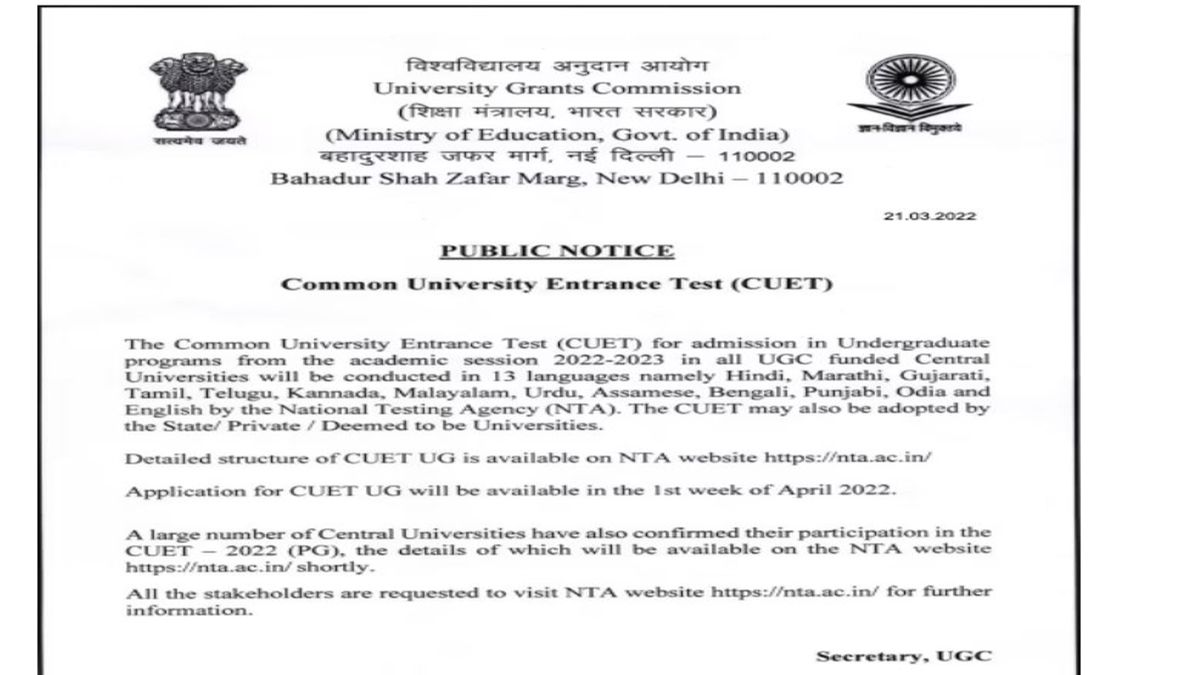 CUET 2022: As per the recent updates, UGC chairman M Jagadesh Kumar has stated that the central universities will have to use Common University Entrance Test (CUET) scores for admission of students to undergraduate programmes. He also said the CUET, in all likelihood, will be conducted in the first week of July.

This rule will come into force from the upcoming academic year (2022-23). It is expected that, the CUET will be conducted in the first week of July by the National Test Agency (NTA). The CUET for UG Admissions will be conducted in 13 languages, including Hindi, Marathi, Gujarati, Tamil, Telugu, Kannada, Malayalam, Urdu, Assamese, Bengali, Punjabi, Odia and English.

Candidates seeking admissions into the undergraduate programmes in a Central University will have to appear for Common University Entrance Test (CUET) compulsorily. Following the CUET, each university will admit students based on a merit list prepared by NTA, and there will be no common counselling. If the CUET is implemented as the sole criteria for admission, the minimum eligibility criteria would be that students must have passed Class 12 from any recognised Board in order to appear for the exam.

CUET will provide equal opportunities to students from across boards, especially to those from the northeast and rural areas. The CUET is also expected to reduce the financial burden on parents and students, as candidates will only have to write one exam. The UGC plans to keep a central admission entry point across the Central Universities, therefore a Common University Entrance Test will be administered by the NTA.

Some universities, including Delhi University, have already announced that they will only admit students to undergraduate courses on the basis of their CUET scores. Also,  as per media reports, the Delhi University’s Academic Council will discuss holding undergraduate admissions from the coming academic session solely on the basis of the Common University Entrance Test (CUET) scores. A proposal in this regard has been made by the Standing Committee.

The decision will be taken to the Executive Council for approval on 25th March 2022. Once passed, it will change DU’s traditional practice of admitting students through cut-offs calculated on the basis of Class 12 marks. All aspirants who would want to get admission in Delhi University will be able to appear for the CUET only in subjects which that have studied in Class 12 to those which are “similar or closely related” to the subjects.

No Best of Four Model for UG Admissions

As per media reports, admission to institutes such as St Stephen's and Jesus and Mary will also be conducted through CUET. As per the recommendations, merit will be calculated based only on the combination of subjects in which a candidate has appeared in CUET. All Central Universities, including the University of Delhi (Delhi University), will be accepting CUET and not other scores including the ‘Best of Four’ mode to offer admissions into the undergraduate programmes.

What about UG Admissions of Foreign Students?

The UGC has exempted Foreign Nationals from appearing in CUET. The Central Universities will continue to offer admissions to foreign nationals through the supernumerary seats. University Grants Commission, chairman M Jagadesh Kumar stated that “The International applicants to the Central University will be offered seats as per the existing practice of the universities, on the supernumerary basis."