CBSE Class 10 Maths syllabus for academic session 2020-2021 is available here. Download the latest CBSE syllabus to know the course structure and along with details of internal assessment.

CBSE Class 10 Maths Syllabus for the new academic session 2020-2021, has been released. Students must check this new syllabus while starting with new chapters. Like this year, Board Exam 2021 will again offer two versions of Mathematics paper to students, one easy and other of the standard level. However, the syllabus for both types of papers remains common. So, all students are advised to refer to the latest syllabus while they prepare for their school and board examinations.

CBSE had introduced certain changes in the Maths question paper structure in the board exam 2020. About 25% of the questions in the paper were of objective type with each carrying 1 mark. The same is expected to be followed in the next year's board examinations. For this, you can check the question paper design suggested by CBSE in this new syllabus.

Euclid’s division lemma, Fundamental Theorem of Arithmetic - statements after  reviewing work done earlier and after illustrating and motivating through examples, Proofs of irrationality of

Zeros of a polynomial. Relationship between zeros and coefficients of quadratic polynomials. Statement and simple problems on division algorithm for polynomials with real coefficients.

Pair of linear equations in two variables and graphical method of their solution, consistency/inconsistency.

Algebraic conditions for number of solutions. Solution of a pair of linear equations in two variables algebraically - by substitution, by elimination and by cross multiplication method. Simple situational problems. Simple problems on equations reducible to linear equations.

Situational problems based on quadratic equations related to day to day activities to be incorporated.

Motivation for studying Arithmetic Progression Derivation of the nth term and sum of the first n terms of an A.P. and their application in solving daily life problems.

2. (Motivate) If a line divides two sides of a triangle in the same ratio, the line is parallel to the third side.

6. (Motivate) If a perpendicular is drawn from the vertex of the right angle of a right triangle to the hypotenuse, the triangles on each side of the perpendicular are similar to the whole triangle and to each other.

8. (Prove) In a right triangle, the square on the hypotenuse is equal to the sum of the squares on the other two sides.

9. (Prove) In a triangle, if the square on one side is equal to sum of the squares on the other two sides, the angles opposite to the first side is a right angle.

1. (Prove) The tangent at any point of a circle is perpendicular to the radius through the point of contact.

2. (Prove) The lengths of tangents drawn from an external point to a circle are equal.

1. Division of a line segment in a given ratio (internally).

2. Tangents to a circle from a point outside it.

3. Construction of a triangle similar to a given triangle.

Proof and applications of the identity sin2A + cos2A = 1. Only simple identities to be given. Trigonometric ratios of complementary angles.

3.  Heights and Distances: Angle of elevation, Angle of Depression. (8 Periods)

Simple problems on heights and distances. Problems should not involve more than two right triangles. Angles of elevation / depression should be only 30o, 45o, 60o.

Motivate the area of a circle; area of sectors and segments of a circle. Problems based on areas and perimeter / circumference of the above said plane figures. (In calculating area of segment of a circle, problems should be restricted to central angle of 60°, 90° and 120° only. Plane figures involving triangles, simple quadrilaterals and circle should be taken.)

1. Surface areas and volumes of combinations of any two of the following: cubes, cuboids, spheres, hemispheres and right circular cylinders/cones. Frustum of a cone.

2. Problems involving converting one type of metallic solid into another and other mixed problems. (Problems with combination of not more than two different solids be taken).

Classical definition of probability. Simple problems on finding the probability of an event.

To know the typology of questions for Class 10 Maths Board Exam 2021, go through the question paper design given below as suggested by CBSE. It will be quite helpful to structure your study plan and work in a productive way. 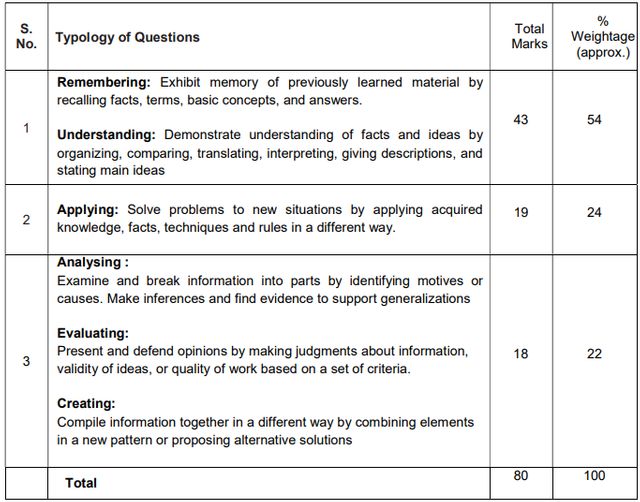 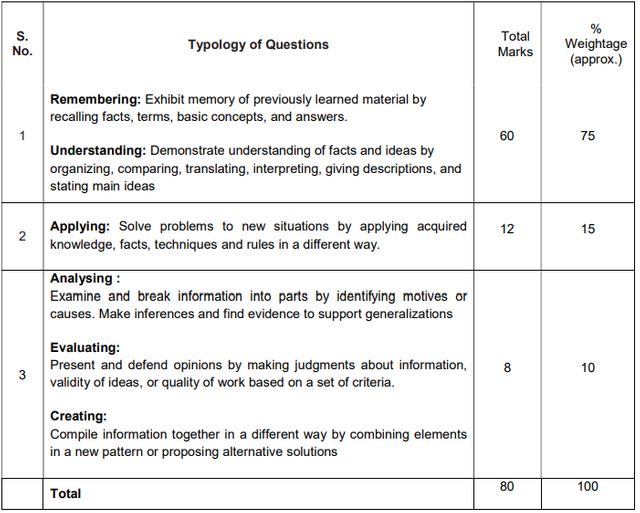