NCERT Solutions for Class 9 English Moments Chapter 6 - Weathering the Storm in Ersama are provided here to access the step-by-step answers for quick learning. Download all questions and answers in PDF here. 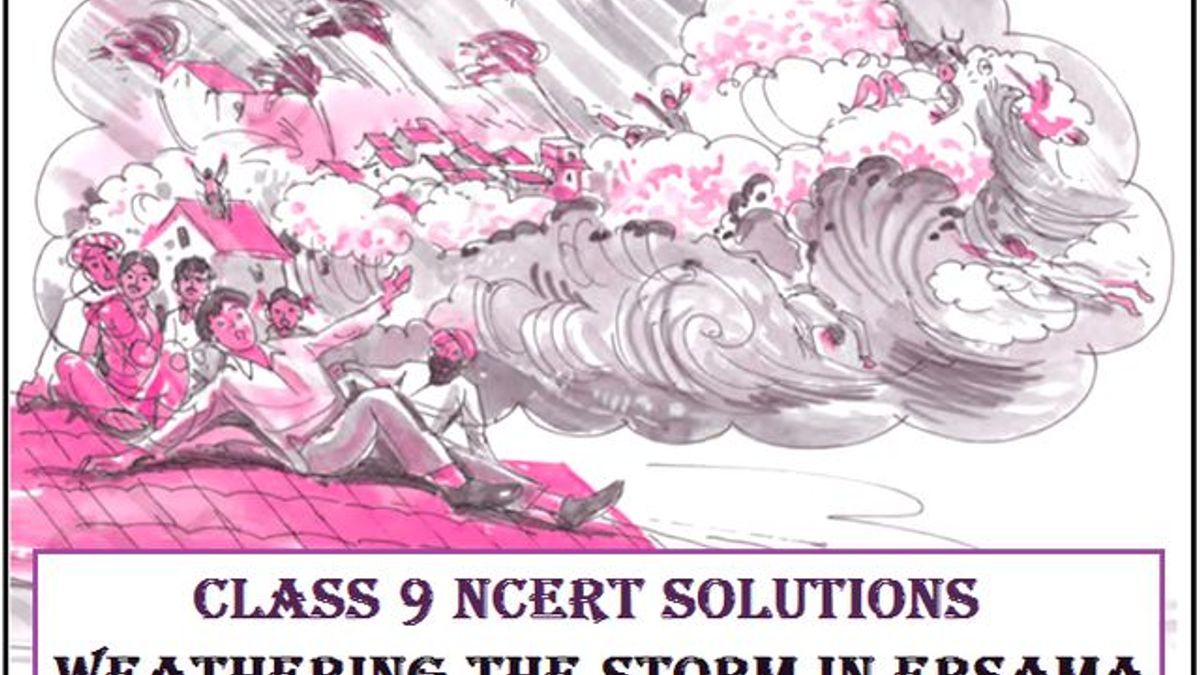 Get NCERT Solutions for Class 9 English Chapter - Weathering the Storm in Ersama for free PDF download. This is the sixth chapter of the Class 9 English Supplementary Reader 'Moments'. We have provided here the NCERT Solutions for the latest edition of the NCERT book for Class 9 English. All the answers are explained in step-by-step manner as is suggested by CBSE in the marking scheme for board exams. Thus the NCERT solutions by Jagran Josh form an essential resource to prepare for all the school periodic tests and the annual examinations.

Check below the NCERT Solutions for Class 9 English Moments Chapter 6:

Chapter 6 - Weathering the Storm in Ersama

1. What havoc has the super cyclone wreaked in the life of the people of Orissa?

The super cyclone devastated everything in Orissa. Majority of the houses had blown away by the strong winds and rains. Muddy water covered everything as far as the eye could see. Many people lost their lives. Bloated animal carcasses and human corpses floated in every direction. Even the strongest of the trees had been uprooted. People became homeless. Children lost their parents and became orphans. There was a shortage of food and drinking water. People were sad and helpless. The scenes were gruesome and heart-wrenching.

2. How has Prashant, a teenager, been able to help the people of his village?

Prashant, who was a teenager decided to help the people of his village by stepping in as a leader. He organized a group of youths and elders to jointly pressurize the merchant to given rice for the people living in the shelter. After this, he organized a team of youth volunteers to clean the shelter and to tend wounds and fractures of the many who had been injured.

Prashant found that a large number of children had been orphaned. He brought them together and constructed a polythene shelter for them. Then he organised cricket matches for children.

Women were mobilized to look after the orphan kids, while the men secured food and other essentials for the shelter. When he realised that the women were becoming too grief-stricken, he persuaded them to start working in the food-for-work programme, which was started by an NGO.

3. How have the people of the community helped one another? What role do the women of Kalikuda play during these days?

The people of the community came together to help one another under the leadership of Prashant. They jointly started the relief work. They pressurised the merchant to part with his rice for the people in the shelter. They gathered branches from fallen trees to lit a fire, on which they cooked rice for all to eat.

When the military helicopter did not return after dropping some food parcels, the youth task force made the children lie in the sand with the empty utensils on their stomachs to communicate to the passing helicopters that they were hungry. This formula worked well and the helicopter started making regular rounds of the shelter to drop food and other basic needs.

Women were mobilized to look after the orphans, while the men secured food and other essentials for the shelter. Women started working in the food-for-work programme started by an NGO.

4. Why do Prashant and other volunteers resist the plan to set up institutions for orphans and widows? What alternatives do they consider?

Prashant and the other volunteers resisted the plan to set up separate institutions for orphans and widows because they felt that in such institutions children will grow up without love and affection and widows would suffer from stigma and loneliness.

Prashant and his group suggested that the children and widows should be resettled in their own community where they can get a homely environment. They suggested setting up of foster families
made up of childless widows and children without adult care.

5. Do you think Prashant is a good leader? Do you think young people can get together to help people during natural calamities?

Yes, there is no doubt that Prashant is a very good leader. He has all the qualities of a leader.  Though he himself was grief-stricken, he got a hold of himself and decided to initiate the relief work in the village. He helped the people of his village in every possible manner to bring their lives back on the track. He is full of energy and has great motivational power.
Yes, young people can definitely get together to help people during natural calamities. Youth is the power of a society who can use their strength and vigour to help people in need.