22 Rules of One day Cricket that You do not know

In 1788, the Marylebone Cricket Club (the MCC) took responsibility for the Laws of Cricket. Now the changes to the cricket Laws are determined by the International Cricket Council (ICC), although the copyright is still owned by MCC. In this article we have described some important rules applicable in the one day format of the cricket.

The global governing body of cricket i.e. the International Cricket Council (ICC) is responsible for the implementation of the new rules in the One day cricket. These rules are made to increase the enjoyment of the game. These rules have to be followed by the all ICC member countries. Some interesting rules of the one day cricket are as follows;

2. No appeal No Out: If a batsman gets out of some way (like LBW, caught behind etc.) and the fielding team does not appeal for out then the batsman can not be given out even if the batsman was clearly out. Appeal is mandatory as per the ICC’s rule number 27.

3. If Bails don’t fall then Not Out:  A batsman is declared out if a bail is completely removed from the top of the stumps. If the bails don’t fall even after the ball hit the wicket then the batsman shall be declared Not out. In August 2017, Sri Lankan pace bowler Vishva Fernando was bowling to Mahendra Singh Dhoni, and the ball hit the middle stump but the bails did not fall so Dhoni declared not out. 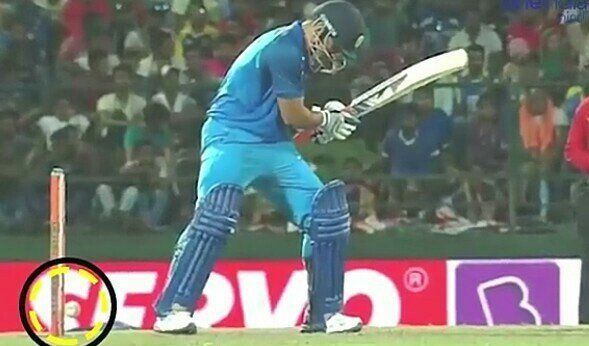 4. The Rules for injured Players: If the injured player goes outside the field and returns on the field without informing the umpire then 5 runs are cut from the score of fielding team.

7. Returning the ball to a fielder: Either batsman is out if (during the play time) he uses the bat or any part of his person to return the ball to any fielder without his consent.

8. Mankading Out: This is a kind of run out. It happens when a bowler; before releasing the ball or without completing his usual delivery swing, attempt to run out the non-striker if the non-striker tries to run from crease before the delivery of the ball.

9. Shot Playing Time: Normally it happens that when a bowler is ready to throw the ball, the batsmen should be ready to play the shot. But if a batsman is not ready to play the shot within 2 minutes, then he is given first warning and if he repeats this mistake, then the umpire is authorised to award 5 runs to the fielding team.

10. Disturbing to Batsmen: If a fielding player disturbs the batsman before paying the shot and ball is thrown then this ball shall be declared dead ball by the umpire and 5 runs are also awarded to batting team.

11. Only 4 Substitute Players: In the one day cricket; each team captain shall nominate 11 players plus a maximum of 4 substitute fielders in writing to the ICC Match Referee before the toss.

12. If there is any change in the playing eleven after the submission of final nomination then this can be done only with the consent of the captain of the opposition team.

13.  Out on No Ball: Generally it is a rule that a batsman is not out on the no ball. But the batsman can be out even on the no ball in these ways;

a. Hitting the ball twice

b. Obstructing the field

14. The ICC match referee shall not be from those countries between them the one day match is going to be played.

15. No team has the right to object to the appointment of umpire and match referee.

16. During the match, no umpire shall be replaced, although this can be done in exceptional circumstances such as injury or sickness.

17. Retired Out: If a batsman retires for any reason; the innings of that batsman may be resumed only with the consent of the opposing captain. If for any reason his innings is not resumed, that batsman is to be recorded as Retired – out.

18. No runs to be scored: If the striker is dismissed/caught, runs from that delivery completed by the batsmen before the completion of the catch shall not be scored or counted as run.

19. Slow over rate: At least 14.28 over should be thrown in the one day match every hour, otherwise the captain of the fielding side shall be penalised for slow over rate.

20. Review decision: If any side wants to take review, then it has to take this decision within 15 seconds of the ball being thrown. To review, the player has to mark the 'T' with both hands and this mark has to be raised at least till the height of the head.

22. During the game the water should not be poured on the pitch.

As a summary, it can be said that almost every cricket lover knows the general rules of cricket, but the rules written above are rarely known to every cricket fan. If anyone does not know all cricket rules then his enjoyment of the game get reduced. Apart from this, the above-mentioned rules are often asked in many interviews, so pay special attention to these rules.