RRB Group D 2022 Result Important Notice Released: The Railway Recruitment Board has released the notice with rules for marks calculation. The board has added new rules that are going to aid the minimum marks calculations for RRB Group D. As per the notice, candidates whose marks is equal to or more than the prescribed minimum marks will be considered for the final merit list. The board has also prescribed the rules to calculate the percentile score for the RRB Group D exam.

As per that, the normalized marks will be calculated by interpolation of raw marks into base shift by using standard mathematical formula. With this, it is now expected that the board will release the RRB Group D result soon. Around 1.50 crores candidates have been awaiting the release of the merit list against 1,03,679 vacancies released by the board.

Have a look at the RRB Group D timeline 2022 for all the events in the table below.

The board is going to release the RRB Group D final merit list after considering a lot of factors. It is for this, that they have notified some rules that is going to help in drafting the same.

The board has earlier notified a formula that is going to be used for calculating the marks secured in the exam. This method helps in correlating the marks in case the examination is conducted in multiple stages. Normalization also helps in maintaining transparency if the difficulty level of two sessions is different.

The process of normalization involves comparing raw scores, standard deviations, and mean marks with candidates of other sessions. Find the normalization formula suggested by the board for the RRB Group d in the section below. 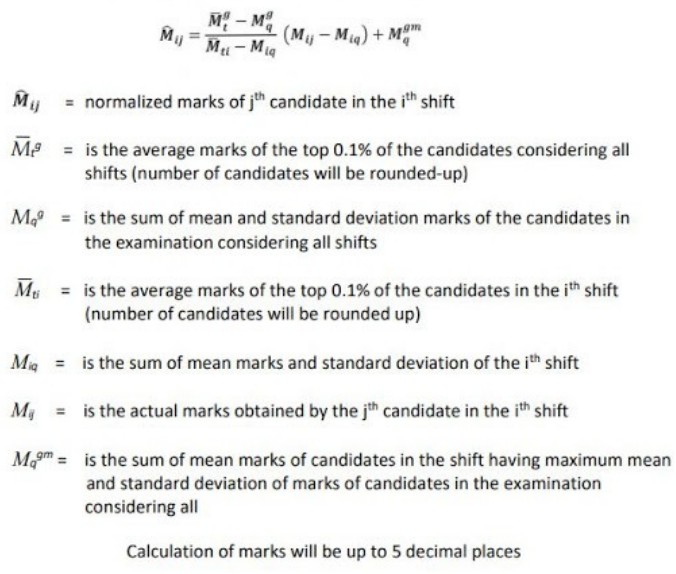 Here are the category-wise minimum marks for the RRB Group D examination that has to be secured by the candidates.

RRB Group D normalisation is a method that helps in normalising the candidate’s score on the basis of exams conducted in different shifts.

The RRB Group D minimum marks will be calculated by interpolation of raw marks into “Base Shift” by using the standard mathematical formula.

Q3: Has the board suggested any minimum qualifying marks for RRB Group D?

Yes, the board has suggested the RRB Group D minimum qualifying marks, 40% for unreserved and 30% for reserved category.