Brain Teaser Puzzle: Can you move only 1 Matchstick in each equation to correct them in 30 secs?

Brain Teaser Puzzle: In this Quiz, try to move only 1 matchstick in each equation to correct them given in the image. Can you solve this puzzle in 30 Seconds? 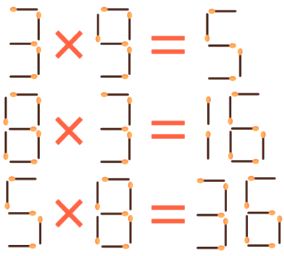 In the above image, you need to move only 1 matchstick in all of the three equations such that it fixes and corrects the equations. An alert mind can solve this puzzle within 20 seconds. You need to analyze the Matchsticks structure carefully shown in the image. As a heads up, the answers to this brain teaser have been given right below the question, so make sure you don’t scroll too far and cheat!

Optical Illusion: Face you see first reveals what you Hate most about your Partner's Personality

In the second equation, the match is shifted in number 3 such that it becomes 2. The correct equation will be: 8 x 2 = 16.

Well, in the third equation, removing the match from the number 8 and attaching it to the five below, we get another fair equality: 6 x 6 = 36. 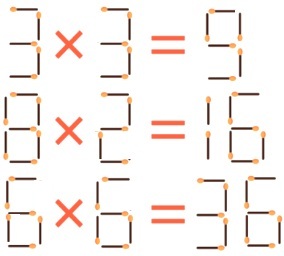 Stairs Optical Illusion: Can you guess in 10 seconds which way is the object moving?

Another answer to this matchstick brain teaser can be:

In the second equation, the match should be taken from the eight and added to the number 6. The correct equation will be 6 x 3 = 18. 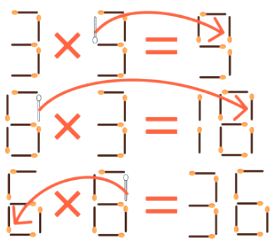 Using lateral thinking will help you to derive answers in such brain teasers. This riddle was tricky but simple as it needs less time and brain power to solve. But it sure feels great when you figure out the answer in a few seconds.