IBPS Clerk 2021 Prelims Memory Based Question Paper with Answer Keys (Reasoning Ability PDF Download): BPS Clerk Prelims 2021 Exam has been commenced and was held on 12th December 2021 in four shifts. The online exam will also be conducted on 18th & 19th December 2021. In this article, we are going to share the important memory-based Questions as per the feedback received by the candidates who have appeared for IBPS Clerk Prelims 2021 Exam. Candidates are advised to definitely cover these questions for scoring high marks in the Exam.

Questions asked in the Reasoning Ability section were of easy to moderate level. The attempt of above 24 Questions is a good attempt. Let’s have a look at the Important Questions that are being covered in the IBPS Clerk Prelims 2021 Exam:

Directions (1 - 3): Read the following information carefully and answer the questions given below:

1. How is the pilot related to lawyer’s wife?

2. Which couple is seated in between the Pilot and his wife?

3. Who is sitting opposite to the lawyer’s wife?

Directions (4 - 5): Read the following information carefully and answer the questions given below:

There are six persons S, T, U, V, W and X seated in two rows and three columns facing each other. S is to the North of W and to the West of U. T is to the South West of U and South East of S. X is not to the West of T.

4. Which of the following two are at any of the corners facing each other?

5. Who among the following pairs are seated in the diagonals?

All roads are highways.

Some highways are freeways.

Explanation: From the Venn diagram below, conclusion 1 can be arrived. Since all roads are highways, it can be said that some highways are roads. Freeways and Roads are not in any way connected. So Conclusion II doesn’t follow.

Some diamonds are gems.

Some stones are diamonds.

Explanation: Below are the two possible Venn diagram: 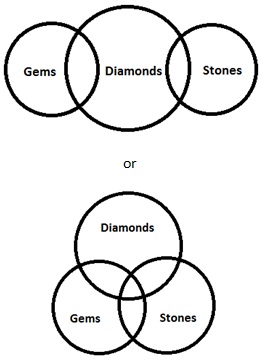 All hills are mountains.

All valleys are mountains.

Explanation: Below are the two possible Venn diagram:

9. Kavita starts from her home to go towards her office. She moves 2 km and turns right and travels 800m to reach a temple on the way. At the temple she turns left and moves 2 km and reaches her office. If Kavita is now travelling in East direction, in what direction is Kavita’s office with respect to her home? 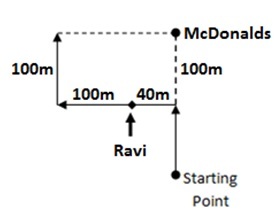 Directions (11 - 13): Read the following information carefully and answer the questions given below:

11. Which writer’s novel is the second last novel from the top?

12. Which of the following writer’s novels are not together?

13. Which is the book between the two books on William Shakespeare?

Directions (14 - 16): Study the following information to answer the given questions:

14. What is the major specialization of X?

15. Which of the following student has Strategic Behaviour as a subject?

16. Which of the following student has Operational Management as a major subject?

Q1. Reasoning Ability Section is of how many marks in IBPS Clerk 2021 Prelims Exam?

Q2. Was there any negative marking in IBPS 2021 Prelims Exam?

There Will Be A Negative Marking Of 0.25 Marks For Wrong Answers

Q3. What is the Exam Pattern of IBPS Clerk 2021 Prelims Exam?