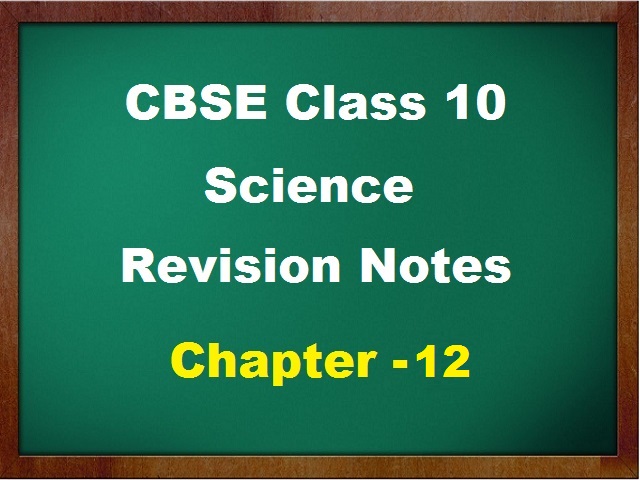 Check here the revision notes for CBSE Class 10 Science Chapter 12 - Electricity. Subject experts at Jagran Josh have prepared these chapter notes to facilitate quick revision before the upcoming CBSE Class 10 Science Board Exam 2021. The best thing is about these notes is that these have been prepared based on the revised CBSE Class 10 Science Syllabus only. So, students can revise all the topics prescribed by the board quickly within a few minutes and in the spare time they can practice with previous years' question papers to score well in the exam.

If a net charge Q, flows across any cross-section of a conductor in time t, then the current I, through the cross-section is represented as:

The SI unit of electric current is Ampere (A).

Ampere: One ampere is equal to the flow of one coulomb of charge per second, that is,

Potential Difference: Electric potential difference is defined as the work done to move a unit charge from one point to the other.

The SI unit of electric potential difference is volt (V).

When 1 joule work is done in carrying one Coulomb charge from one point to another then potential difference between two points is called 1 volt.

Ohm’s law: It states that the potential difference across the two points of a metallic conductor is directly proportional to current passing through the circuit provided that temperature remains constant.

where, R is called resistance and is a constant. 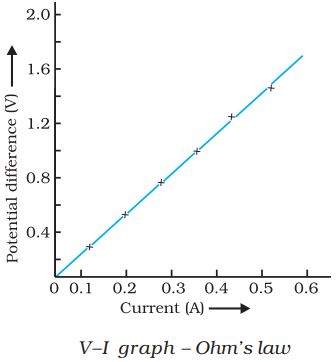 Resistance: The property of a conductor to resist the flow of charges through it is called resistance of he conductor.

Resistance of a conductor depends on:

(i) length of conductor.

(ii) area of cross-section of conductor.

(iii) nature of material of conductor.

Resistivity (ρ): The electrical resistance offered by a substance of unit length and unit cross-sectional area is called resistivity.

Alloys do not oxidise (burn) readily at high temperatures. For this reason, they are commonly used in electrical heating devices, like electric iron, toasters etc.

Copper and aluminium are used in electrical transmission due to their low resistivity. 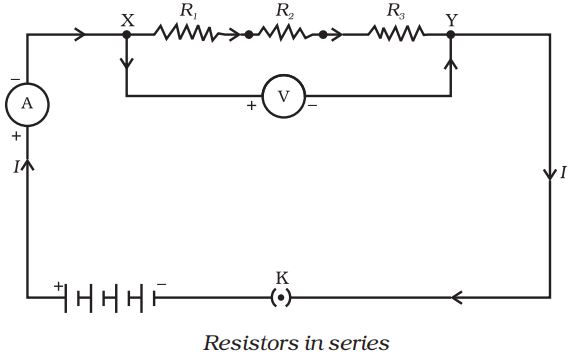 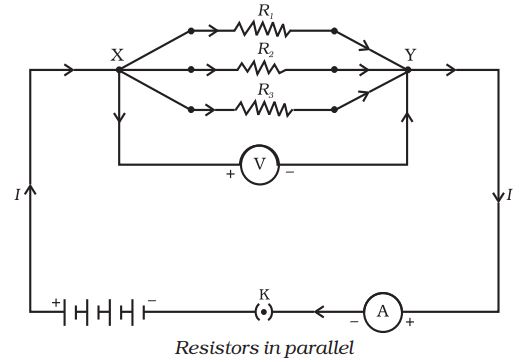 (i) In series circuit, when one component fails the circuit is broken and none of the component works.

(ii) Different appliances need currents of different values to operate properly. Therefore, they cannot be connected in a series combination as current remains same in the series circuit.

(iii) The total resistance in a parallel circuit is decreased.

For example: When electric energy is supplied to an electric bulb, the filament gets heated because of which, it gives light.

Joule’s law of heating: It states that the heat produced in a conductor is directly proportional to

(i) square of current for a given resistance,

(ii) resistance for a given current, and

(iii) time for which the current flows through the resistor

(i) In an electric bulb, the filament of bulb gives light because of the heating effect of electricity. The filament of bulb is generally made of tungsten metal because it has a very high melting point and also it does not oxidize readily at a high temperature.

(ii) Electric fuse is a safety device to protect the electrical appliance from short circuit. The fuse is placed in series with the device. It consists of a piece of wire made of a metal or an alloy of appropriate melting point, for example aluminium, copper, etc. If a current larger than the specified value flows through the circuit, the temperature of the fuse wire increases. This melts the fuse wire and breaks the circuit saving the appliances attached in the circuit.

(iii) The element of electric iron is made of alloys having high melting point. Electric toaster, electric oven, electric heater and geyser work on the same mechanism.

Electric power (P): The rate at which electric energy is dissipated or consumed in an electric circuit, is termed as electric power.

The SI unit of electric power is watt (W).

One watt is the power consumed by a device that carries 1 A of current when operated at a potential difference of 1 V.