SSC GD Constable 2021 25271 Vacancies Recruitment Details: The Staff Selection Commission has announced 25271 vacancies for Constable (GD) Post in various CAPF Departments. SSC will conduct Computer Based Examination (CBE) only in English and Hindi for the recruitment of the following posts in different paramilitary forces:

Check How to Apply Online for SSC GD Constable 2021 Exam

- The vacancies are Tentative. Any change in the number of vacancies will be intimated through the website of the Commission.

- Vacancies are state/ UT wise hence a candidate must submit a domicile/ Permanent Residential Certificate against his/ her state/ UT.

- Vacancies of Constable (GD) in SSF will be filled on an All India basis whereas vacancies in all other CAPFs will be filled as per the vacancies available in various States/ UTs. In addition, vacancies are earmarked for the Border Guarding Districts and Militancy/ Naxal affected Districts which are reserved for the candidates of these districts only.

Border Security Force (BSF) is mainly employed for Internal Security Duties and for other Law & duties on the requisition of the State Government. Being a Central Armed Police Force (CAPF), it can be entrusted with policing duties at any place apart from its mandate. Let’s look at the GD Constable 2021 Vacancies in BSF:

The Central Reserved Police Force (CRPF) is one of the largest paramilitary organizations of India that looks after the internal security of every part of the country and also operates abroad as part of the Indian Peace Keeping Force (IPKF) and the United Nations peacekeeping missions. CRPF performs a variety of duties ranging from VIP security to election duties or from guarding vital installations to the counter-Naxal operations. This year CRPF has not announced any vacancies for the GD Constable post for both male and female candidates.

ITBP is a multi-dimensional force that primarily performs the following functions:

NIA functions as the Central Counter-Terrorism Law Enforcement Agency in India. This year CRPF has not announced any vacancies for GD Constable Post for both male and female candidates.

Assam Rifles is a potent organization with 46 battalions and its associated command and administrative backup. It is designated by the Group of Ministers (GoM) committee as the Border Guarding Force for the Indo – Myanmar border and is also its lead intelligence agency. Let’s look at the GD Rifleman 2021 Vacancies in Assam Rifles (AR):

Assam Rifles (AR) is under the control of the Indian Ministry of Home Affairs (MHA) and they perform many roles including:

There are chances of promotion for a Constable (GD) after a certain period that are placed under different CAPF Departments. However, the time period is different for all departments. Most of the time, candidates will have to take departmental exams for promotions. While at certain times promotions are also given considering the number of years given to the service by the candidate. Let’s look at the organizational hierarchy and promotion flow of Constable (GD) Post: 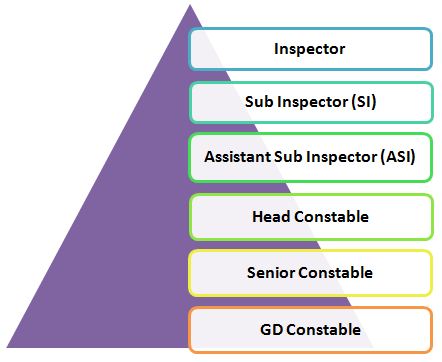 The final selection will be based on the candidate’s performance in all the three phases of the SSC GD Constable Exam, i.e., Computer Based Examination (CBE), Physical Efficiency Test (PET)/ Physical Standard Test (PST), and Detailed Medical Examination (DME).

What is the Educational Qualification for SSC GD Constable 2021 Recruitment Exam?

What is the Selection Process under SSC GD Constable 2021 Recruitment?

What is the age limit for SSC GD Constable 2021 Recruitment?

How Many Vacancies have been announced for SSC GD Constable 2021 Recruitment?